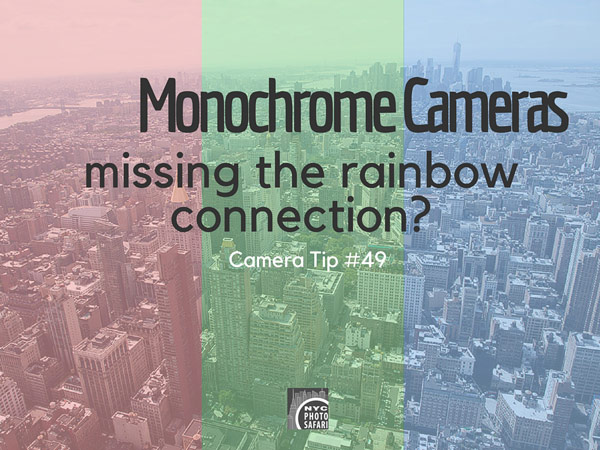 Recently, several camera manufacturers have produced b/w only cameras; meaning they are only capable of producing black and white images ,even in the raw format. Yes you heard right, black and white only - meaning no color data is captured at all.

First, the benefits. In order to capture color, digital sensors essentially have an extra layer meant to capture color. With this layer stripped away, the sensor becomes more sensitive to light which brings with it a bump of almost 1.5 stops in light gathering capabilities (fantastic). Also, without the extra layer, overall resolution increases. Lastly, because of the lack of color information, there is a gain in dynamic range, also fantastic.

Now the cons. There are some serious downsides to shooting with a monochrome sensor. First, you can only shoot in black and white, hence the name "monochrome". One of the most significant gains photographers got with the advent of digital photography was the ability to really control the black and white image. When you take a photo that is color and convert to black and white in a program like Photoshop, you have the ability to keep the color information intact. This is extremely important information which is eliminated with a monochrome sensor. Why is it so important? After all you are only concerned with shades of gray right? Not really. By having the color data we are better able to manipulate our final black and white image. Consider that the monochrome sensor is only sensitive to reflective light, not colors, just reflective light. Consider the image below, a fair skinned person wearing a slightly darker than midtone sweater on a background filled with midtones. In color, we see a fair amount of separation because of the varying colors, however when converted to black and white you can see that the image as a whole is quite flat and gray, with almost no contrast. Using the color information available, we can now decide what is more important in the image and we can make it stand out more. With simple manipulation of the blue, we can see how the the woman is beginning to pop; the back ground color (red and yellow and green were also manipulated a.

To do this with a monochrome camera, the photographer would have to filter it out during the shooting phase. Which means that the photographer would be carrying more equipment. Furthermore, that filter? It would drop the light gain by about 1 stop, potentially reduce the resolution and furthermore would only affect one color spectrum. It seems like the gains mentioned above are not such great gains when you consider the overall losses. Considering that the Leica monochrome camera runs about $7000, one has to wonder if it wouldn't just be more beneficial just to go back to shooting film. Oh, one of the key arguments for shooting this camera? Is that it produces a "true" film look. Again why not just shoot film? At $7k+, you would do better to shoot film.