Photo Tips Podcast: What You Need to Know about Polarizing Filters #19 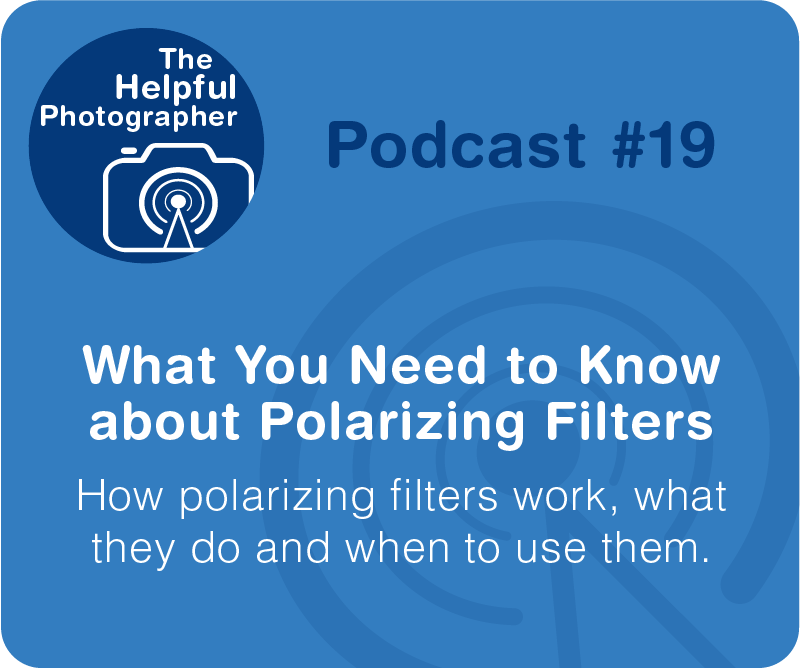 
Transcript
What You Need to Know about Polarizing Filters


Zim: Many people believe that you need to have a polarizing filter on your camera all the time. I personally don’t agree with this advice but before we talk about whether or not it’s a good thing let’s talk to Professor Rebecca Theilmann from the University of California San Diego about polarizing filters and get a better understanding of how they work.

Hey Dr. Theilmann! Welcome to the podcast. Thank you so much for joining me today!

Dr. T: Thanks for having me.

Z: So how’s the weather there in Southern California.

Dr. T: You know it’s not too bad today. It’s cooled off a bit but it’s going to start to be an Indian summer again.

Z: But no fires where you are right?

Dr. T: Nope. They've been contained for about a week.

Z: That's great. So, today we're talking about polarizing filters. I understand that you have a PhD in Optical Sciences from the University of Arizona, is that right?

Z: Great. So you would be the perfect person to talk to about this right?

Z: So my understanding of a polarizer is basically it's there to reduce glare coming off shiny objects like chrome reflections and that kind of thing. And the way it does that is as the light comes into the lens the polarizer essentially pushes it 90 degrees in the other directions and that's how you kill the glare off. Is that correct?

Dr. T: No it's not. A polarizer, it's whole goal is to prevent light from entering the lens in the camera that has a specific feature associated to it. And that feature is identified with the wave nature of light. Light has two natures, wave and particle array. Now, the wave nature of light is something that is familiar to everybody. It's the distance it travels when it comes from an object into the center of your lens. Imagine thread tied at one end and the other end of the thread comes into the camera as you would expect it to have. Now the wave nature of light, this talks about the vibrations the light has as it travels as a ray, as it travels down the thread. These vibrations, if you try to imagine putting a Life Saver around the thread and you spin it as it's going down, that is the nature of the light that we are trying to prevent from entering into the lens of the camera. Which is what we call polarized. Natural light is not polarized; this is light that is illuminated by the sun or incandescent light bulbs. But light that is reflected off of surfaces becomes polarized.

Z: So anytime natural light like the sun or incandescent light bounces off of any surface you call that polarized light?

Dr. T: It has to be off of a specific like reflective surface, like a pond, a piece of glass, off the floor. Any kind of shiny surface where you would get what looks like glare. That light has specific patterns as it's traveling towards you.

Z: So bottom line is you polarizing filter is actually filtering out that particular kind of light to kill the glare is that correct?

Dr. T: Correct. And it's not the color of the light, it's the pattern of that vibration as it's traveling towards you as it enters the camera.

Z: So it has nothing to do with the angle of the light?

Dr. T: No it has nothing to do with the angle. So where ever you're pointing camera at, if there's light off a reflective surface it will come in and it's specifically linearly polarized. It's like putting up a grate against your lens. That's exactly what it is, that prevents light from coming in at that particular vibration coming towards you from entering the lens.

Z: So what's a CPL a circular polarizer and how do they work?

Dr. T: So a Circular Polarizer does the same thing. A polarizer kills that vibration of light, if it's linearly it's along a line, and so if your polarizer is aligned in the same way it will kill that light. What a circular polarizer does is it starts with a linear filter that kills the light of that pattern and then what it does is it puts in what's called a quarter wave plate behind it that creates a lag in the vibration so instead of being aligned it comes out like a circle. Which is like imagining that spinning Life Saver coming down the line of thread. And that's what it does. But the features are basically the same. It prevents light with that pattern entering the camera to the sensor.

Z: So I heard someone describe a polarizer as sort of being a peg board, where you can put circular pegs through but square pegs won't go through and polarized light is like the square pegs. So your polarizing filter is your peg board only allowing round pegs to go through. Is that right?

Z: Ok, so I have another question which is, we find that these polarizing filters can reduce the amount of light coming into the camera, by sometimes up to nearly 2 stops of light so they're always dark. Do they always have to be dark in order to work?

Dr. T: No. They don't always have to be dark. I'm not an expert in the creation of polarizing filters. I think the fact that they're dark is y just a process of creating the filter itself. It could be clear but I'm just going to say no it doesn't necessarily have to be dark.

Z: So at this point it doesn't seem like the technology allows us to make a clear polarizing filter. It's just probably part of the manufacturing process.

Dr. T: Right. But the polarizer, remember if light is being naturally illuminated, such as in a landscape, the light from the landscape will pass through the polarizer, the lens and onto the sensor of the camera for your picture. It's any kind of light that's specifically reflected. So, whether it's dark or not it's not preventing that light from coming through and reducing the illumination of your entire image. It's only from the reflected light.

Dr. T: Right. Which is why sunglasses are great for when you're driving or any of those situations because the surrounding landscape doesn't get affected, it's the reflections.

Z: Is there anyway around that? No right?

Dr. T: Nope, You can turn the phone 90 degrees. So they don't line up. (laughter). Which is actually a good experiment if you want to try it. Have your sunglasses on naturally, and it will be dark. If you take them off and rotate them 90 degrees you will see them perfectly clear through your sunglasses.

Z: But I thought directionality didn't have any affect?

Dr. T: So linearly polarized, it's kind of like sifting through a grate or a set of lines. The direction is important. So on the front of your camera with your polarizer, I'm pretty sure you have to rotate the polarizer to find the sweet spot where glare is completely reduced. If you rotate it 90 degrees from that point you'll see it will come back.

Z: So my next question is, a lot of people use polarizing filters to enhance the blue sky. My inclination is because your polarizer reduces the amount of light coming into the camera which we are always fighting, you're better off doing this in post production like in Photoshop, or Light Room or something like that. The question is why does it enhance the blue sky. What's it doing there.

Dr. T: I mentioned before, light becomes polarized when it comes off a reflective surface. Blue sky is also polarized. If you look up at the blue sky it has that linear polarization associated with it. So if you were to put a polarizer on your camera, what that does is it prevents light from the sky, blue sky it reduces the illumination from that specifically but not anything outside of that. What it can do is it just reduces the intensity of the blue entering your camera.

Z: So it makes it feel more saturated overall? By darkening it overall.

Dr. T: Yes, correct. One of the things though is with saturation is when you talk to a technical person with camera system and sensors, saturation to me means that you've blown out, there's too much light hitting the sensor and that's it. Where as it sounds like if you have less light entering from that color spectrum which is specifically the blue sky, it means the color has become more saturated in your image. It's different terminology

Z: Yea. That's pretty much it. Is there anything else I should know as a photographer? Oh, I do have one more question. I'm sorry.

Z: Would a polarizing filter inherently change the quality of my image?

Dr. T: If it's not made out of plastic and everything like that, where it would smear the image just because it's poor quality, no. The polarizer should not alter your image in any respect other than just reducing the amount of light from polarized light.

Z: So is there anything else we need to know as a photographers with regards to polarizing filters?

Dr. T: No. The core knowledge of the whole thing is that it's sole purpose is to reduce light that has that feature: that polarized feature from entering your camera system. That's it. And it only happens in certain cases: blue sky and light off reflective surfaces. If that's what you don't want to enter your image that's when you use a polarizer.

Z: Ok. Well, that's so much. That was really informative. Can I call you again if I have more questions?

Z: Thanks for joining me. Talk to you next time.

Dr. T: Talk to you next time. Thanks for having me.

Z: So that was pretty enlightening for me. I really thought that the way polarizing filters worked was that they brought light in and redirected it 90 degrees in a different direction and I was completely wrong. But my conclusion with regards to having a polarizing filter live on your lens remains the same. The fact is that they reduce the amount of light coming into your camera. That means you're losing stops of light. So use a polarizing filter if you need to. Don't use it if you don't need to. So it shouldn't live on your lens, it should only be there when necessary. I hope that was helpful.