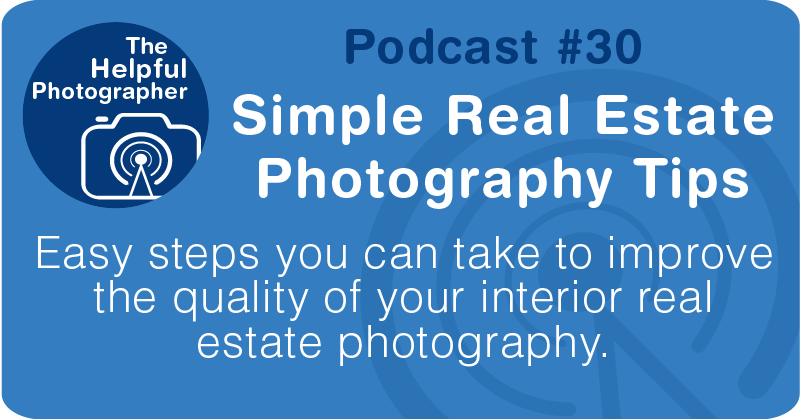 
When I’m teaching people architectural photography it’s mostly about shooting exteriors of huge landmark buildings or if it’s an interior, it’s still a large space like a cathedral. But this is really different than shooting the types of interiors that most architectural photographers are paid to shoot, which is often interior spaces like an office or a residential space like a house for real estate agents. In my opinion the most important goal for real estate photography is to give the viewer a sense of what it’s like to be in the space. And to do this you need to make sure the space is properly prepped before you start shooting. I think it’s probably as important as the photography itself.   The first thing you need to do is to clean up the space. Hide any electrical cords by taping or clamping them out of the way like behind a table or chair leg. Be sure not to use any tape that might damage the wall.  Have a few books or an open magazine on the table, or maybe a plate of cookies or light some candles. You might want to introduce a couple of house plants into your shot as well, and if house plants be sure to remove any dead leaves and trim any leaves to make them look nice. I’m literally talking about taking a pair of scissors and cutting the leaves to the right shape. Pay attention to the wall art, often I find that people don’t have enough art on the walls or the art is too small for the particular wall. Bring your own large painting and use those temporary 3m hooks. Those 3m hooks will also allow you to move the artwork around to fit the image you are creating too. Oh, and be sure to have the fireplace on, even if it’s the middle of the summer! Otherwise there’s a dark hole in the middle of the room. The last thing you’ll want to do is to vacuum the floor, but don’t leave any vacuum lines in the rug, so you might need to walk over it a couple of times. But remember not too much, you don’t want to leave any footprints.

Although it’s obvious that the space should be clean and uncluttered, the key is that it still needs to look lived in. It shouldn’t be so manicured that it looks like a museum. There should be pillows on the couches but they shouldn’t look like they’ve been sat on, but on the other hand there shouldn’t be so many that you couldn’t imagine siting on the couch either. I often find that people have their furniture spaced too far apart especially in a living room, as a result this leaves a huge empty space in the middle of your photo. But before you start moving furniture my suggestion is to decide which direction you want to be shooting from first. And then move the furniture for that particular angle. Many times you’ll find that the furniture needs to be placed at slightly odd angles to make the photograph look normal. This often drives designers nuts but designers are there to make  the space work for those who are actually living in the space; this is completely irrelevant for us photographers, because our job is to only to evoke the “feeling” of living in the space. And more often than not this requires moving the furniture closer together and placed at seemingly strange angles. To be clear I’m not saying that it should look odd in the photo; no, it should look perfectly normal to the viewer of the photo, but it will just be odd for anyone who is standing in the actual room. One word of caution, if there is anything valuable that needs to be moved, do make sure either the designer or the home owner is the one moving it. And never walk on site without proper liability insurance. And I’m definitely not kidding.

As for angles, the most surprising thing for me when I first started shooting architecture, was the fact that so many interior shots were done while standing on top of a ladder.  The key is that, unless you are trying to encapsulate something on the ceiling or a two story space, you’ll need to be at about 6ft or higher to give the viewer the sense that they are looking at the space at eye level. I’ve often found myself shooting at about 7ft or so, for the overseas folks that’s about 2 meters. Amateur photographer too often just set their tripods up at chest height and that’s often just too low of an angle.

So along with your camera you’ll want to bring a step ladder and a tripod to your shoot. You’ll definitely shoot with a tripod. Why? 2 reasons. You’re going to be making a lot of adjustments to make sure the furniture is placed just right and every time you do that you will need to check your camera angle. So it’s best to have the camera set in a static position that you can return to it over and over again. And most of the time you will be shooting in the middle of the day with lots of light coming in through the windows which means there’s a high probability that you’ll need to do some HDR. However if you don’t know what HDR is you probably won’t be doing this anyway so don’t worry about that too much. But you’ll still want to be on a tripod. I’ll explain HDR in another podcast. That’s it for today. In the next episode I’ll talk about shooting exteriors. Until then keep on shooting.