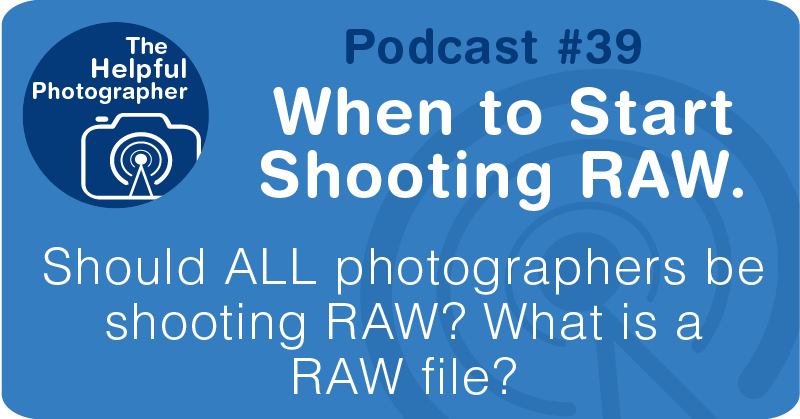 Transcript
When To Start Shooting RAW #39


The quick answer is NOW… maybe. There are a lot of people out there who say it’s RAW or nothing. But I can’t totally agree with this notion. But before I get into that, let’s review what a RAW file is. A RAW file is essentially the RAW uncompressed data coming out of your camera. It’s all the data your camera created when you pressed the button. As a result, RAW files are really really big. But since it’s raw data, it really can’t be viewed unless you have special software that can decipher the information. It used to be that you had to use something like PhotoShop in order to view those files.  These days, even simple software like Apple’s Finder or Microsoft’s Explorer are capable of deciphering RAW images, but website browsers still can’t. Since the RAW file contains so much data, it’s more easily manipulated and it also has a lot more resolution; as a result it gives you a lot more elbow room to play with. In other words if you made some serious mistakes when you shot the image, like with exposure or if you set your white balance inappropriately, you’ll have a much greater likelihood of fixing the problem if you had shot a RAW file. You can still fix some problems when it comes to a jpg,  but you won’t have nearly as much latitude as you do with a RAW file. It should be noted that when you are reviewing your RAW images on the back of your LCD, you’re actually looking at a jpg.

As a result of all the data that’s available and the high resolution nature of a RAW file, many photographers think that it is far superior to a jpg file, which is a much smaller and it’s a compressed file format. So is a RAW file really superior? Well, if you need the data then yes it is. But if you don’t need the data then not at all. For instance, if you’re like me and you occasionally sell stuff on Ebay, it’s simply not necessary to shoot those images in RAW. If I shot a small jpg I would be able to post it directly onto Ebay right out of the camera without having to convert it from a RAW file. This of course assumes that I expose and frame the image properly. So whether or not you need to shoot RAW file, depends on the conditions in which you like to shoot most often AND also what you plan to do with the image.

So what conditions would demand that you shoot in RAW? The one that comes to mind is high contrast. Situations where there’s a huge variance between the dark areas and the light areas of your image. For instance, a landscape in the middle of the day where you have a sky filled with really bright clouds with lots and a landscape filled with really dark trees. By shooting in RAW you’ll have more success recovering the textures in both the sky and the trees. But it should be noted that your ability to recover that information is not infinite. There are certainly limits as to how much you can recover in both the dark and light areas. So if you are in situations where you have lots of contrast it would definitely be best to shoot in RAW.

So how does what you plan on doing with the image factor into the RAW discussion? If you plan on printing the image particularly large, like poster size, the resolution of a RAW file would prove rather helpful to insure that the print looks great. Lots of resolution is also helpful for those who have to do a lot of cropping like bird photographers. Bird photographers often can’t get close enough to their subjects and as a result they have to do a lot of cropping, which means they need as much resolution as they can get out of their cameras. But as I said above if you are just posting stuff on Ebay, there’s probably little reason to no reason to be shooting in RAW.

If you need to publish the image fairly quickly to a website or social media but you might also need the images for high quality prints later, you’ll probably want to shoot both RAW and jpeg images at the same time. If your camera is capable of shooting RAW, there will be a menu item that will allow the camera to create a RAW and a jpg file simultaneously every time you press the shutter button. The jpeg will allow you to post immediately, and the RAW will be there just in case you need it for something more important down the line.

Lastly, what shouldn’t stop you from shooting RAW would be the file size. Although the file size is rather large and getting larger every day, storage is getting cheaper and cheaper as well. A terabyte external hard drive literally fits in the palm of your hand and can store over 100,000 frames for the cost of about $50. So if you think that you might need all that great data a RAW file can give you then absolutely start shooting RAW right away.