How to Achieve Sharper Macro Photos #43 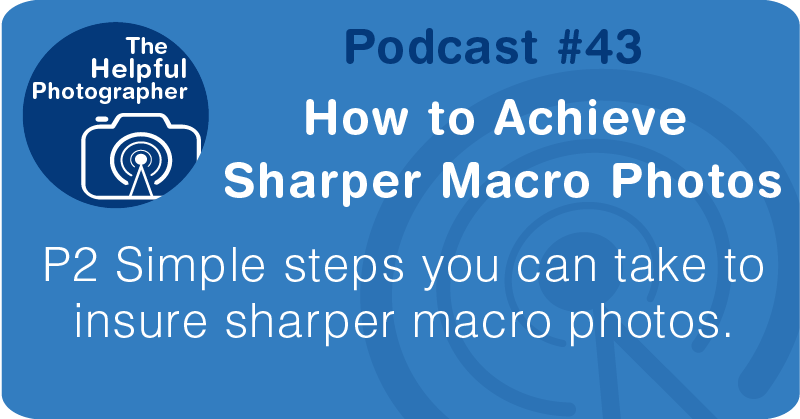 This is the second of a three part series on Macro Photography.

When it comes to macro photography the biggest problems revolve around focus. Both with blurry photos and where to put focus.

First, not getting focus at all. You need to understand that every lens has a minimum focusing distance. The minimum focusing distance is the closest you can place an object in front of your lens and still hold focus; this can be anywhere from a few inches to a few feet, depending on your lens! If you are using single shot auto focus and you are closer than that distance you will find that the camera will refuse to fire, because in auto focus the camera will not fire unless it detects that there is something in focus. You will also often find that the camera will refuse to focus on the flower you are attempting to photograph but the blade of grass just beneath the flower looks great! This happens for 2 reasons. The blade of grass is likely further than the minimum focus distance while your subject, the flower, is closer than the minimum focusing distance. The other reason is that often flowers lack the contrast and texture the sensor needs in order to achieve focus and so the camera is having a tough time focusing. If you are using a budget alternative to the macro lens, which I went over in the previous podcast, you will find that you have a maximum focusing distance as well. Whereas an actual macro lens will allow you to focus from the minimum distance to infinity, the budget alternative will only allow you to focus anywhere between 1 and 10 inches. Meaning that if the subject is further than that maximum, you will never get focus. That’s why I said in the previous podcast that there is no infinity focus with these options.

Let's say you are further than the minimum focusing distance. And the camera is actually focusing but the depth of fields is really rather shallow, so that only a tiny portion of the subject is actually in focus. The shallow depth of field is actually a really common problem, and this is because you are so close to the object. Remember, the closer you are to the object the shallower the depth of field, which makes hitting focus even harder. To create more depth of field you'll need to close down your aperture, do some focus stacking or move back away from your subject and crop the image in post process. The problem with closing down your aperture is that often you don't have enough light and this will either force your ISO up, reducing resolution, or slowing down your shutter speed which may cause motion blur. And of course backing away from your subject and cropping also means that you will lose some resolution depending on your camera. As for focus stacking. This is great if you are shooting in a controlled studio environment. But let’s face it most of us like to be outside shooting flowers which are often subject to the wind. Which will make focus staking nearly impossible.

Another problem that many macro photographers face is motion blur. Like I just said, many of us like to be shooting outside; as a result of this you'll find that the slightest of breezes will not only push your flower out of focus but create a motion. In this case you need to speed up your shutter speed to stop that motion but the consequence of that is a wider aperture! The hurdle I have been trying to get over lately, is having enough light to deal with the fast shutter speed in combination with a smaller aperture opening. The result is increased ISO. One way around this is to simply introduce more light in the form of a flash. The flash will effectively stop the motion of moving objects. Adding a flash could be a great way to add some interest to your images as well. But that’s a completely different conversation which I will leave to the next podcast.

Now that you know how to get more focus the question is where should you focus? Because the depth of field is so shallow, you need to be more decisive about what you focus on. To that end you will also probably want to be using a smaller focus area and force the camera to disregard everything else. By the way, “should” is a strong word and the answer to what “should” you focus on is actually rather subjective. In my opinion you should focus on what you want the viewer to pay attention to. That’s it. The hard part is deciding what you want. Unfortunately, I won’t be able to advise you on that and maybe a discussion with your therapist about what you want might help!