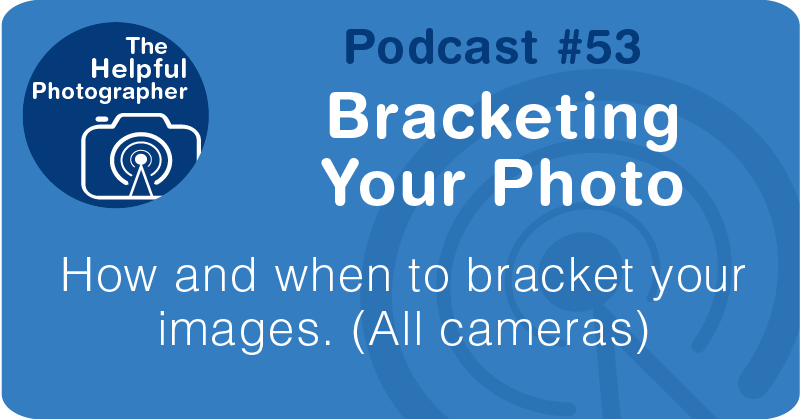 For me there are two key reasons why I would bracket. But before I tell you my two reasons for bracketing, let me explain what bracketing is. Bracketing is when you take multiple shots of the same composition at different exposures. Normally you would bracket one stop brighter and one stop darker than what is considered your middle exposure. When we were shooting film and couldn’t see whether or not we nailed the exposure, you would bracket to make sure that one of your images was good. This is still one of the reasons I continue bracket; even though the latitude is so much greater in digital than with film? I still believe it’s always best to nail your exposure the best you can. So when I’m in a hurry and I’m not totally sure about my exposure, because I don’t want to take too much time to think about it and I know one of my brackets will give me the correct exposure and since digital is really really cheap and missing the shot is very very expensive? I just bracket. But for the most part? These days, bracketing is about stacking your images in post process. By stacking images shot at various exposures we can create an image with details in the darkest black areas as well as the brightest highlights. So if you have a situation where the scene has a lot of contrast you would want to bracket. For instance if you’re shooting inside a church with very large detailed stained glass windows. Often what you will find is that the inside of the church is very very dark while the details in the stained glass are blown out because it’s very very bright. By bracketing you can insure that you will have details in both areas.

So now, that you know when to bracket, let’s talk about how do you bracket. There are three ways bracket. If you are shooting manually, you can move your f/stop, ISO and shutter speed combination to get your over and under exposures. If you are shooting in Program, Shutter priority or in Aperture priority you can move your exposure compensation to do your bracket. Or the last way is to do an auto bracket. Not all cameras have an auto bracket feature, so you will have to resort to the first two methods. But if your camera can do an auto bracket, in the least it will allow you to do what we call a three bracket, some cameras will allow a 5, 7 or even a 9 bracket. This just indicates who many frames it will automatically fire for you. In a standard three bracket, the camera will automatically move your settings to give you an image at a -1 stop, a zero and a +1 stop exposure. Whereas a standard 5 bracket will give you a -2, -1, zero, +1, and a +2 exposure. How many exposures you need depends on how much contrast you have. You will want to have at least an exposure that show details the brightest areas and an exposure that show details in the darkest areas; that is if this information is important to you.

Higher end cameras will allow you to do brackets at smaller than 1 stop increments. For me I don’t find that particularly necessary. But I am sure that this may be helpful to some photographers. Another option is the ability to move the center away from zero. In the examples I just gave, the middle exposure is based on what the camera deems as the optimal middle gray exposure. There will be some instances where you want all your brackets to be darker or brighter than what is considered your zero exposure. To do this you would set your exposure compensation to a plus or a minus as your center. And the camera will bracket away from that point.

Although I just said that you can do this in your Aperture priority, your Shutter Priority and your program modes you need to know what happens when you do that. In Aperture Priority, the camera will move the shutter speeds to get your over and under exposures. So if you are shooting in situations where your over exposures my get a little long, you may need a tripod. On the other hand in Shutter Priority your camera will move your aperture. Again, if you are shooting in low light with a relatively short shutter speed you may run out of aperture to accomplish the over exposures. If you are shooting in Program mode the camera will move a combination of aperture and shutter speeds to accomplish a bracket. In all these instances if you have the camera set on auto ISO, it will likely move ISO in combination with f/stops and shutter speeds. It should be noted that if you are hand holding and depending on what you are shooting, it’s probably best to use Aperture priority or Program mode with Auto ISO to do brackets, because if you use shutter priority and have a big spread between the highest and lowest brackets you may see a big shift in your depth of field because it’s moving the aperture around. However if you have a tripod available it’s probably best to shoot in a static ISO in Aperture priority, because then it doesn’t matter how slow the shutter speed gets. However if you have something moving in your frame such as a waterfall, that changes the situation completely.

Another thing to note with regards to your auto bracket is this. If you have your camera set to single shot. Which means that you need to lift your finger every time you want the shutter to fire, you will need to press the shutter for as many shots as you set your bracket to, before it starts over. If, however, you put it on continuous shutter all you need to do is to press the shutter button and hold it down until it stops. The camera will fire off all the frames you set it to and stop once the bracket is complete; remember you must hold your finger down until it stops, otherwise you will be left in the middle of the bracket. If you are shooting on a tripod and set the camera for a timed release you’ll also only need to press the button once.

When you shoot your bracket be sure to complete your bracket before moving to the next shot; otherwise you will start your next shot in the middle of the bracket. If you’ve lost your place, simply turn off/on your camera; this will reset the bracket to start over. You should know that some cameras will turn of bracketing off altogether if you turn your camera off, this is a preference that can be changed in your menu. It is also possible to change the order in which your camera shoots the bracket. For whatever reason, pretty much all cameras are set to shoot the middle exposure first, then the under exposure and then the over exposure. This makes little to no sense to me – but obviously someone out there thought this was a great idea because I’ve seen it as the default in every single camera I’ve ever picked up. So I set my camera to shoot the images sequentially from negative to positive exposures. Some cameras will allow you to shoot from positive to negative. That’s up to you.

That’s it for now. I hope that was helpful, if so please rate us on iTunes or wherever you listen to this podcast.