Photo Tips Podcast: The Two Weakest Parts of a Tripod #74

Photo Tips Podcast: The Two Weakest Parts of a Tripod #74 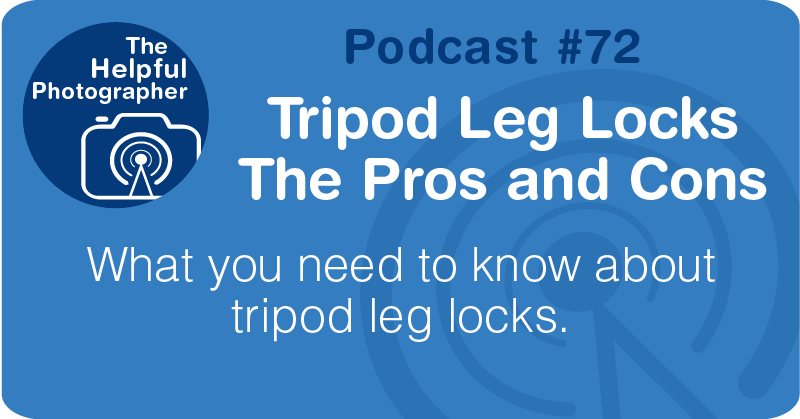 
Transcript
The Two Weakest Parts of a Tripod #74

I’m starting to feel like I talk about tripods a lot, but the fact is it’s one of the questions I get a lot!!! I hope this podcast will really be the last one for a long time, because I think this will complete most of the things you need to know when purchasing a tripod.
As much as I try to encourage people to buy better tripods I still see a lot of people skimping and making bad choices. For me I think a tripod should be rugged enough to last a lifetime. You should be able to beat the crap out of it. The other thing is that it needs to be able to lock your camera in place. Two podcasts back I talked about leg locks, which is definitely important because your legs certainly need to stay at whatever height you decide on. A lot of inexpensive tripods look and feel sturdy but when you take it out in the field you find that the legs don’t lock very well at all. So when deciding on a tripod always give the system a good push to make sure that the legs can fully lock.
But then there’s the head, most people pay attention to the legs and fail to consider the head, which I think constitutes 50% of the functionality of your tripod. The locking mechanisms of your head should be beefy enough to lock whatever lens and camera combination you mount, onto the head, at any angle you choose. The cheaper tripods most often have problems with the mechanism that allows you to do a vertical shot. Very often they just don’t do that very well.

The last and MOST overlooked issue with tripods is the plate. I’m talking about the quick release plate which attaches to your camera and allows you to quickly get in and out of your tripod head. Shockingly enough, the construction on these plates make a huge difference in your tripod’s performance. Inexpensive tripods have plates that never really lock into your camera. It may feel very tight at first but if you do a vertical shot and angle the camera even slightly above or below level, you will find that the camera slowly slips out of place! I have yet to handle an inexpensive tripod that did not do this. Some may think that this comes into the design of the plate itself; on the lower end of the spectrum, it’s only part of the problem. Very often, inexpensive tripods have a proprietary locking system. And that proprietary locking system isn’t always the most reliable thing you can imagine. Another contributing factor is the screw itself. Very often the grip for the screw is so small it’s difficult to actually tighten the plate very well. The last contributing factor that I see is the rubber used on the plate itself. Take the Manfrotto RC2 plate; it’s has been around for decades, and they work great but they’re also $25 just for the plate alone. So when people lose their plate they tend to go after the knockoff, rather than buy one manufactured by Manfrotto. Although the design of the plate is the same, and it will lock into your Manfrotto head, the difference is in the rubber. This alone prevents your plate from being locked solidly onto your camera. Again, the plate will lock into the head but your camera won’t lock into the plate. And as a result you’ll find that they literally won’t hold vertical shots that are not level. They’ll slip every last time just like the cheap plastic plates that come with cheap tripods. So don’t go with a knock off if you have a Manfrotto RC2 plate.

You should know that almost all high quality tripod manufacturers have chosen to adopt the Arca Swiss quick release plate; even Manfrotto is slowing standardizing its heads for Arca Swiss. And honestly I’ve only run into a couple of Arca Swiss plates that slipped due to bad rubber. And of course, as with anything you can definitely buy cheap Arca Swiss replacement plates that slip as well. The key with the Arca Swiss plate just like the RC2 plates is that the locking mechanism into the tripod head is incredibly secure that is if mount it properly. Again, the problem with cheaper tripods very often is that manufacturers make proprietary plates and proprietary locking mechanisms which tend to be shoddy and along with their shoddy plates which only compounds the problem.

Choosing a tripod that utilizes the Arca Swiss system also means that you can easily replace the plate. And you can go from head to head without changing the plate and it will allow you to use an L bracket for your camera. Don’t worry if you don’t know what that is. If you are looking for a tripod, my opinion is to try to get a head that utilizes Arca Swiss, make sure that the head and legs are beefy enough to take the weight of your camera at any angle.