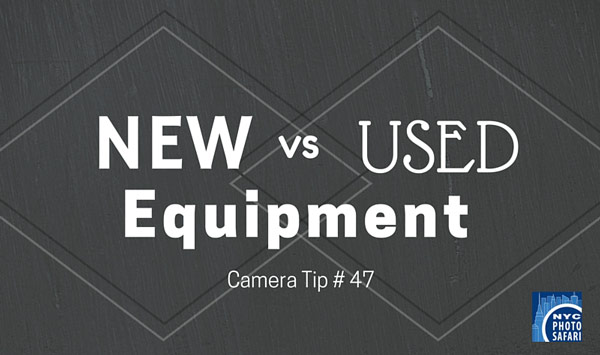 Is it OK to buy used equipment? In the days of film the answer was fundamentally yes; but with digital it's not so clear anymore. The main problem with buying anything used is what we call an "impact point". Has the camera taken an impact - has it been dropped? With film cameras, the main fear was a crack in the body that would lead to a light leak onto the film. With digital cameras we are now worried about whether or not the sensor has been knocked out of alignment or if the one of the electronic connections is loose which would mean camera failure at some arbitrary point in time (usually when you are ready to take the best photo of your life). Generally speaking most of the time you can see the point of impact on just about any piece of camera equipment because impact points are difficult to hide, but sometimes you can't. Today there are more and more cameras with plastic housings, and although this isn't necessarily a bad thing it also means that they don't generally take quite the impact that a professional body with a titanium base can take. Impacts on these cameras tend to be much more obvious.

Impacts on lenses also tend to be rather obvious as well; that is, if you can touch the equipment. If you are looking at a used lens, you simply need to turn the elements. Twist the focus ring and see if it is moving smoothly. If the movements move at an angle and not straight up and down, then it has been dropped. If there is any sand in the movements you will hear or (most likely) feel it while twisting the zoom and/or focus ring. If you find that while twisting the focus or zoom ring that the elements are stiff, this may not be a bad problem; as a matter of fact, it could even be a good thing. If the ring is stiff it often means that it has not been used often. If it is intermittently stiff and smooth, then there is problem with the lens. You can also tell the difference between a heavily used lens with a new one just by looking at it. Does the matte black color of the lens look like it just came out of the box or smooth? Do the connection points look like they have worn away and show the brass part underneath? Do the black parts look a bit white and faded? These are all signs that the lens has been used a lot. The more use the lens has gotten, the shorter its lifespan, and the less you should consider buying it.

With regards to buying used digital bodies, you will want to know how many shutter actions it has had. Today we tend to shoot 3-5x more frames than we did with film. As a result, our cameras are breaking sooner. Whereas you might have bought a 20 year old film camera without problems previously, you simply would not do that today. Aside from changes in technology, cameras will fail mechanically. Most cameras are rated for approximately 100,000 frames. So when buying used bodies, it will be important to know how many shutter actions the camera has made. To verify this you will need to simply ask the seller and hope that they are honest. To truly verify this information you will likely need to hook that camera up to a computer which has special software to read that information. Although the software is often free on the Internet, it would be difficult to ask a seller for such access. Having said this, any camera that has had 100K+ shutter actions will probably show a fair amount of wear and tear.