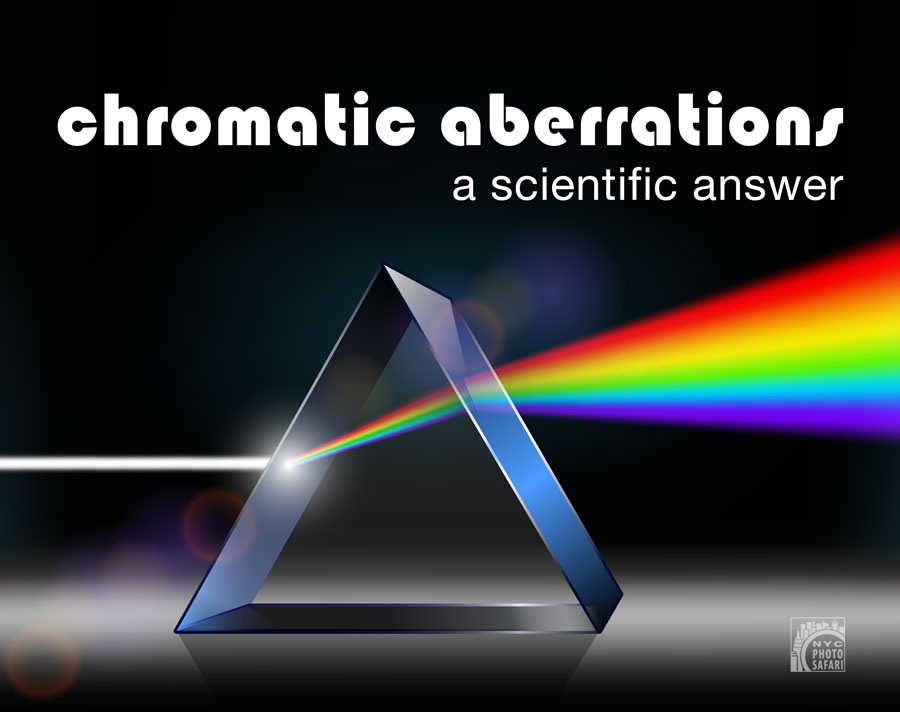 Chromatic aberrations: what is it and what causes it? For a scientific answer we asked Dr. Rebecca Theilmann at the University of California San Diego.

NYCPS: What are chromatic aberrations?

Dr. T : Chromatic aberrations are what photographers commonly call “color fringing”. It is most commonly found in photographs where there are hard edges between subjects of different colors. For instance when you photograph a black box next to the blue sky. You will notice that the edge of the box next to the blue sky is not a clean gray and blue line but rather the edge is soft and there is a rainbow of colors there.

NYCPS: So the fewer glass elements there are, the better it is in defeating this problem?

Dr. T: Yes. This is why I recommend my colleagues doing scientific research use old camera lenses rather than new ones.

NYCPS: Did this used to happen in film? It never seemed to be a topic of discussion then.

Dr. T: It sure did, but due to the nature of film chromatic aberrations were less noticeable. Luckily manufacturers are using software technology to minimize this problem.

NYCPS: So why does using a smaller aperture opening like f/22, intensify the problem. Shouldn’t this decrease the problem?

Dr. T: First, using a more focused light, which photographers like to refer to ask “closing down” does not intensify the problem as much as it makes the problem more visible. The chromatic aberration is always present. What happens when you are using a less focused light, as with a wide aperture, more light is scattered around masking the problem. With a small aperture it is just more visible.

NYCPS: Is there a way to eliminate this problem?

Dr. T: Unfortunately not. Scientists working with optics are working on ways to reduce this problem, but it is not likely that they will ever be able to eliminate it altogether - that's just physics. But as mentioned above a lot of this is being eliminated by software; so in combination with improving the glass itself and software we'll see less and less of this in the future.