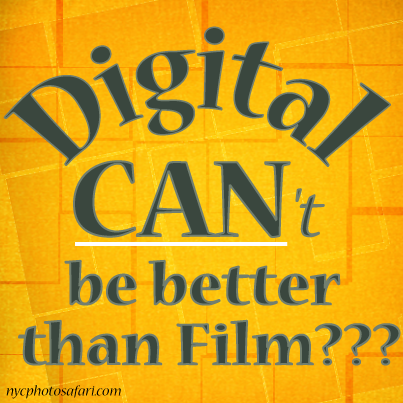 YES IT IS! Digital photography has a much longer latitude than film, more than double. The resolution from an average digital camera today has better resolution than 35mm film. Digital cameras allow you to change the ISO on the fly, rather than having to wait until you finish the role of film. You can control your ISO in one third stop increments. You can control your f/stops and shutter speeds in 1/3 increments as well. Digital has allowed the photographer to post process images exactly the way the photographer wants, without having to rely on someone down at the lab to do it and possibly get it wrong.

Digital photography has allowed us to experiment more without having to consider the cost of film and developing. Digital cameras have allowed more people to enjoy photography.

For the last time: DIGITAL PHOTOGRAPHY IS BETTER THAN FILM!