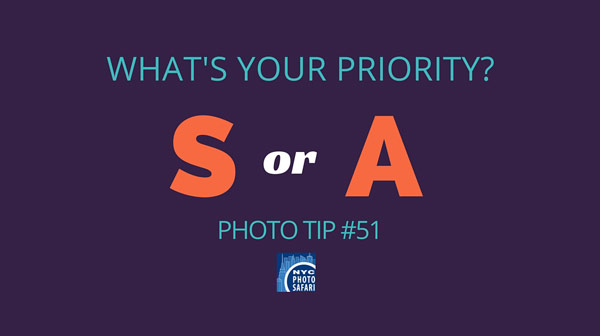 There is a lot of confusion about when to use Aperture priority and when to use Shutter priority. What is the difference? In Aperture priority ,the Aperture remains wherever it is you set it. On other words it's sticky. Whereas in Shutter Priority, the shutter speed is sticky. But what is Aperture? Aperture is the opening and closing inside your lens. It uses a mechanical device to allow more or less light onto the sensor. Ostensibly, it also controls depth of field (which is how much is in focus from the front to the back of your scene). Shutter speed, on the other hand, allows more or less light onto the sensor by extending or shortening the time that the shutter is open, allowing the sensor to see more or less time.

The answer to the question: Use Aperture priority when you need to have a particular Aperture (or depth of field) over and over again. For instance, if you are photographing a portrait and want to be wide open for a shallower depth of field, then Aperture priority is your setting. On the other hand, if you are photographing moving objects and want your shutter speed to remain constant, then use Shutter Priority. It's simple.