There are dozens of blog posts about "getting off the auto mode". So what's wrong with automatic? If manufacturers keep putting millions into R&D to make Auto better, there must be something to it. A key complaint is that in an Auto mode the camera "tends" to make the exposure middle gray and that somehow this is bad. The fact is that it does not "tend" to do this, its DESIGNED to do it. Most Auto modes use an evaluative/matrix metering system which IS MEANT to help you get a middle gray exposure in every photo. So first we need to explain what middle gray is and then we'll get back to why Auto ain't so bad.

In art, middle gray is the halfway point between black and white in terms of reflective quality. In photography, middle gray is dictated as 18% gray. If you buy a neutral density gray card (aka, a "gray card"), it will be 18% gray. If you put a gray card in the middle of any scene and take a meter reading from it, you will have a perfect middle ground exposure for the entire scene that you are photographing. Although a middle gray exposure is not ideal for all photos, it is ideal for the majority of photographs. All metering systems are going to return an 18% middle gray exposure, whether you are taking a reflective reading (like what your "in camera" metering system does) or an incident light reading (like what a handheld meter does)*.

For instance, if you have three objects (one black, one gray and one white) and take a reflective reading off of each and then take a photo of all three objects with each reading, you will find that the object you took the reading from will be middle gray. In the diagram below, image #1, image #2 and image #3 are of the same scene and contain the same three objects (a black cloth - left, a 18% gray photo card - middle, and a white card - right). Each photo was taken with a reading from the where the blue dot was placed. As you can see, wherever the blue dot is placed is now middle gray. So when the reading was taken from the black area the entire image is over exposed (see image #1) because the meter is attempting to make that black area middle gray. On the other hand, when the reading was taken from the white area (see image #3) the entire scene is under exposed as the meter attempts to make the white middle gray. With the reading on the gray card (image #2), the scene correct; the black is basically black and the white is basically white. To reiterate, images #1, #2 & #3 were taken with a light meter reading from the blue dot.

On the other hand, Photos A & B were taken via the camera's evaluative metering system. The camera's metering system samples over 30 different points and returns an average reading; the camera uses a reflective metering system. As you can see, image A looks correct as the black is basically black and the white is basically white. Because the scene is almost exactly half black and half white, the middle ground exposure leaves the blacks black and the whites white. On the other hand, using this same metering system, image B is a bit over exposed (compare image B with Image #2). However, this is actually correct per the camera's algorithm, which is to return an average middle gray exposure! If you look at the scene, the dark areas are the majority of the image (black + gray area = more dark areas than the white area) therefore the camera must return an exposure that is a little bit brighter in an attempt to achieve an average middle gray exposure. Although the exposure should be a little bit darker to make the black black because it would be closer to what we see visually, the camera can not make that calculation in evaluative metering as it can only take the average. This is one of the rare instances where spot metering makes sense - you would spot meter only the gray card and use that reading (like Image #2) in order to leave the blacks black and the whites white.

But how often will you have an 18% gray card to use? On the other hand if you were spot metering for image A, how would you take that reading? Or rather, how would you determine the correct exposure? Using a spot meter you would take one reading from the white and one from the black and then take the average. But isn't that what evaluative metering did to give us a perfect exposure in image A, without asking you to do any math? In general, for most of what we photograph in everyday life you would not encounter the problem of image B. And if you did it would be difficult to argue that the exposure is wildly wrong; you have to agree that it is incredibly close.

A question that often arises is the back lit subject. Unfortunately there is no easy answer for this. If you meter just the subject the entire scene will be over exposed (just like image #1). Conversely if you meter the bright area, then the whole scene will be under exposed (just like image #3). With evaluative/matrix metering the average will still likely be a little bit underexposed (given what most back lit subjects look like). In situations where you have significant differences between bright and dark areas and need to retain information in the middle, the problem is only resolved through a change of light; simply changing exposure will not fix the problem. If you meter for the bright or the dark areas via spot metering the other will be either too bright or too dark (again image #1 & #3); in other words the problem remains the same (eg. unsolved). In some instances (eg. silhouette) this may work well, however in most instances you just simply do not have a photo; you will need to change the light or consider bracketing and using HDR in post process, which will not be discussed here.

In the last image (C) the reading was taken with an incident light meter. As you can see the exposure is almost exactly the same as image #2 - which is a good exposure. Again, the incident meter reads only the light falling on the meter (ostensibly the same as that falling on the subject) and not reflecting from the subject. For most situations this works very very well and returns an incredibly accurate exposure, however it means that you are carrying an extra device. Also, incident meters are not omni-directional. Therefore, if the subject is back lit you will still have problems calculating the "proper" exposure as with spot or evaluative metering mentioned above.

But the question remains, what about Auto? In any fully automatic mode your camera will use evaluative/matrix metering, which means that it will take full advantage of all the technology it has at its disposal. It will take a sample reading from 30-100+ areas of the scene and calculate an average reading which should render a grey card grey. Unlike the example above where we were reading only from a tiny portion of the scene, your auto mode will sample almost the entire scene. In very few instances (i.e., image B) this may mean that it will be a little bit over or a little bit under exposed. But for the most part it will be dead on middle gray.

So the question is, why is this bad? Fundamentally we here at NYC Photo Safari are asking the same question. It seems like the middle ground exposure is a good thing, isn't it? The answer is YES, this is GOOD. To repeat, for the vast majority of what most photographers are photographing, the middle is good. However, it's not good when a large portion of your image is not middle gray. For example, what if you are photographing a small object on a large white background? Or on a large black background? The large background area will overwhelm the calculation and therefore not give a pleasing exposure. To be clear, it is a correct exposure, but sometimes (as in these instances) the average is not where you want to be.

Another question oft asked is, doesn't this make the case for shooting in a Manual mode? The answer is NO. The key reason why shooting in a manual mode does not resolve this problem is that Manual mode still relies on the same metering system as Auto. This metering system tells the camera how much light there is in the scene and tells Auto and Manual mode the same thing. If you use an evaluative meter reading in Manual, you will get EXACTLY the same exposure as in Image B - which was taken in an Auto mode. The difference is that in Auto the camera sets your f/stops and shutter speeds for you, while in Manual mode you have to set this on your own.

In the instances where you have a large background which is vastly different in tone than your main subject you may want to consider using a center weighted or spot meter reading so that the background is disregarded. Remember, a center weighted reading will read only the large center portion of your frame while the spot reading will only read a spot about 2 degrees from the center. For this to work, it also relies on the assumption that your main subject is middle gray, if it is not then you will have to make further calculations. Whether you are using spot, center weighted or evaluative metering in an Auto or a Manual mode, the camera's metering system will return the SAME exact values.

So we'll say it again, Auto is good because today's modern evaluative meter readings are fantastic at returning a middle gray exposure which is where you want to be most of the time. Not all the time. But most of the time. 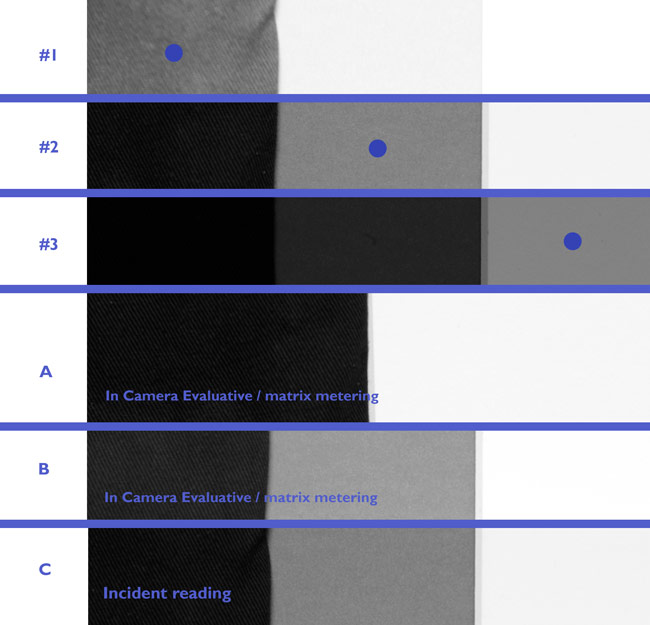