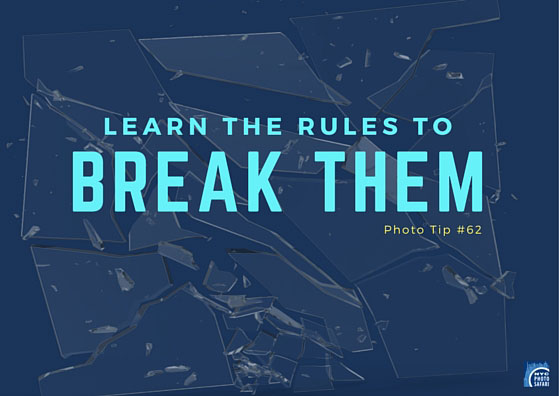 If you have been on a photo safari with any of our photographers you would have heard that the rule of thirds is more of a guideline than a rule. And that painting by the numbers will rarely produce great art. So, should you follow or disregard the rule of thirds? The short answer is both.

Confused? What are the merits of following the rule exactly? And, by exactly, I mean displaying grid lines on your viewfinder or LCD and attempting to put your subject exactly in one of the cross hairs. But herein lies the first problem, although you know exactly where that third is with those grid lines, the question is where to put that target? For instance if you are photographing a person, do you put the cross on their left eye or their right eye? Or perhaps their nose? Let's just say nose for now. The next question is how big should their head be? As you try to follow the rule of thirds "exactly", there is room for interpretation. By deploying the rules in an arbitrary, but exact, manner you can begin to see where things work and where things fall apart. The key here is that you have to be able to look at the photos critically to see if it actually works as an image. The rule helps you to see whether or not the photo is capable of communicating something or evoke feeling etc., not just clicking when you manage to put something in one of the corners. The rule of thirds can help you see when your image works and when it doesn't work.

As you begin to study your images critically, you will find your way to a mode of self expression that may or may not involve the rule because, at the end of the day, the rule of thirds is rather arbitrary. So the next question is when do you disregard the rule of thirds? Always. A photograph should be about communication. Does it communicate your intent? In other words, does it communicate your vision of what is in front of you? People say that every picture must tell a story, but what story does a photo of a beautiful flower tell other than the fact that it is beautiful? A photo must only communicate what you want it to communicate to your particular audience. A strict rule of thirds may not be essential to communicating your vision to others.