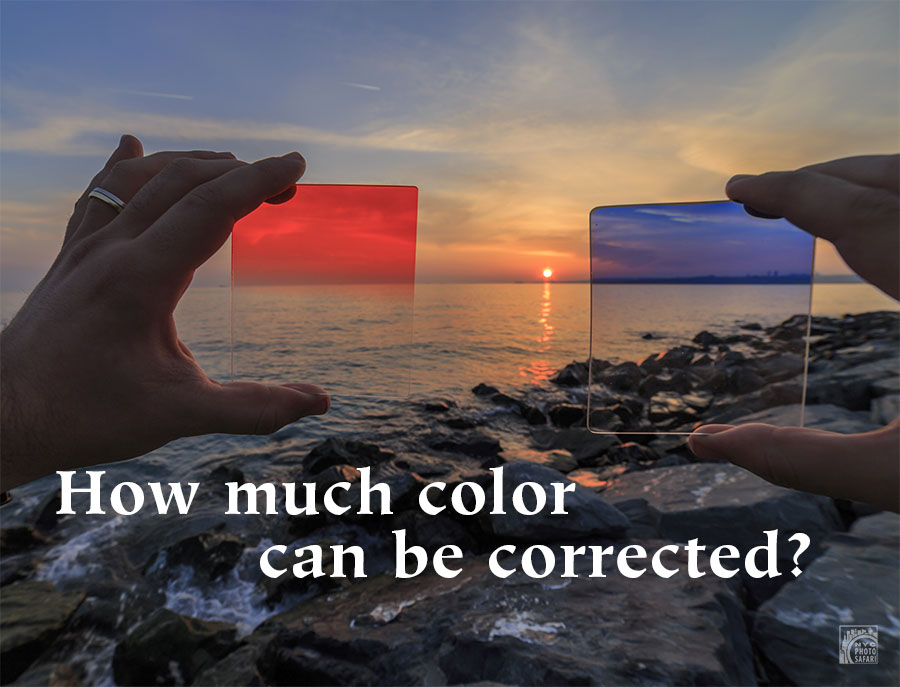 Filter color cast. Is this a problem? When we were still shooting film, most of what happened in the field was permanent. In other words if you got it wrong when you shot it there was almost no going back. As a result of this, making sure that filters were exactly the color they said they would render was extremely important. This also made them very expensive. Take for instance a Kodak Wratten filter, which was literally a sheet of colored plastic about twice the thickness of sheet of paper. Even in the 90's they cost between $8 and $20 each even though they were extremely easy to scratch and easily damaged. What made them expensive was that they were optically correct and they were exactly the color they said they were. For instance 10 points of cyan or 2 points of yellow etc. If a filter had the wrong color or your used the wrong filter, it would be difficult or nearly impossible to fix in the darkroom. Of course this depended on how far off the filter was. With the advent of digital photography and the raw file, the conventional understanding is that you can correct out any color in post production. But is this really true? To put this notion to the test we bought some rather cheap plastic filters on ebay costing only a few dollars each.

Here’s what happened. (all images were produced using a Canon 5D Mark IV)

#1 Control – this is the image directly from the camera with no edits. 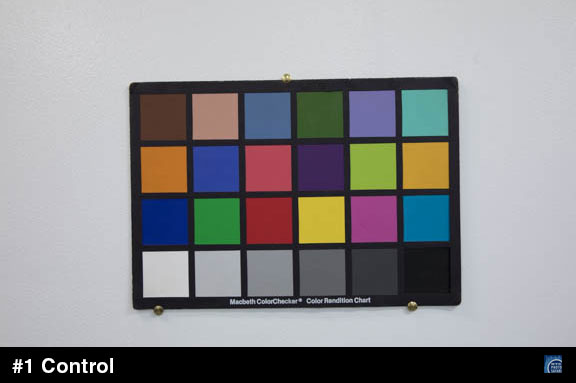 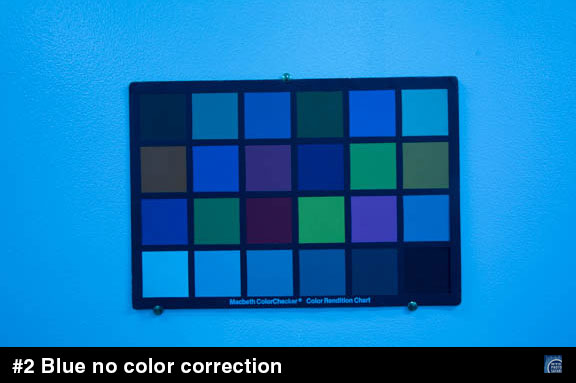 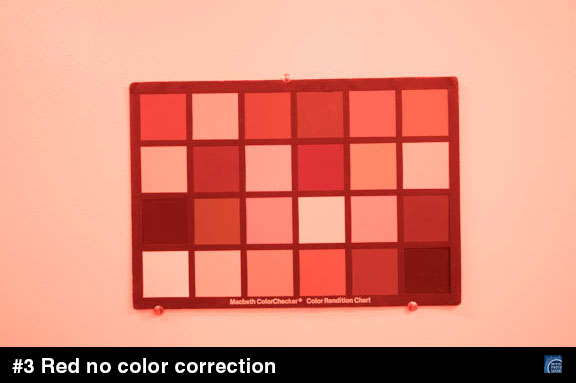 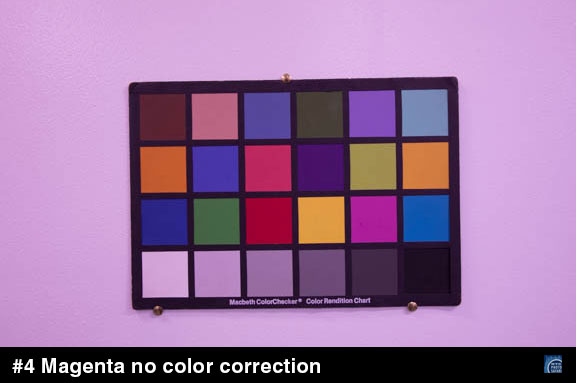 #7&8 Neutral Density Filters – These two images were photographed using a cheap plastic ND filter and a very expensive one. 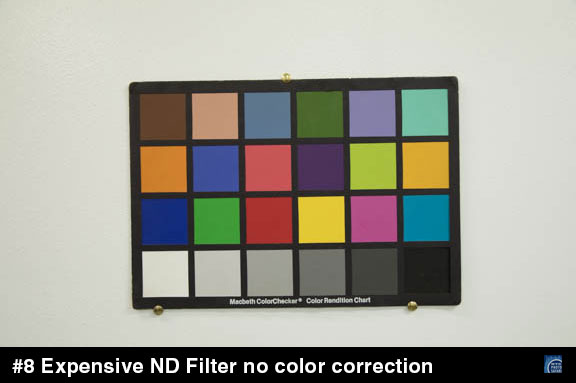 The above images were then color corrected using the white balance sampler tool in Lightroom and a sample was simply taken from the white square on the bottom left. There was an attempt to manually correct the images but alas Lightroom had already gone as far as it could on both images (no attempts were made in Photoshop). As you can see, depending on the color and amount of color there is a point at which you cannot correct it back to neutral if that color is baked into the image, even if you are shooting raw. Please note, no adjustments were made for contrast or exposure in Lightroom. Sometimes filters can change the contrast of an image, and certainly the clarity as well. Although the red filter had as many points of red as the blue filter has of blue, it would seem that the sensor did not pick up very much red. Here are photos of some of the filters used. As you can see the red and blue filter have the same number of color points as the green filter and yet the green filter was more easily corrected for. There were fewer points of color in the magenta and orange filters which explains why they were mor easily corrected for. 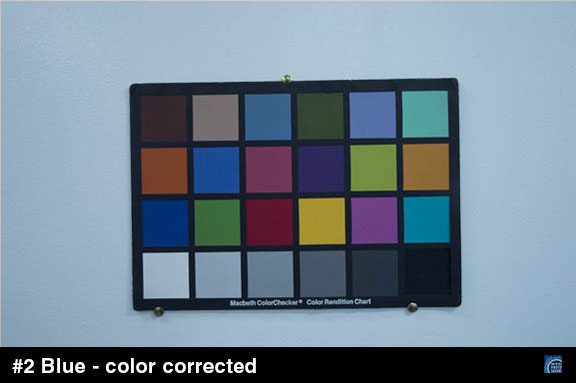 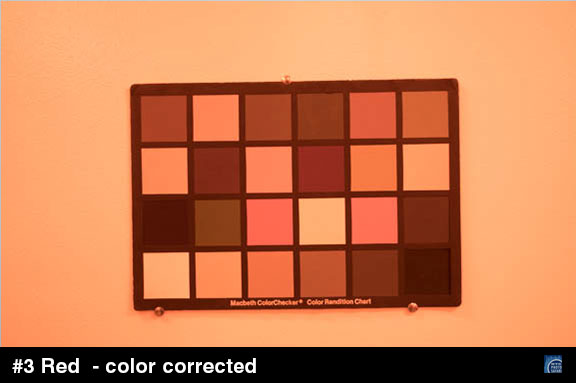 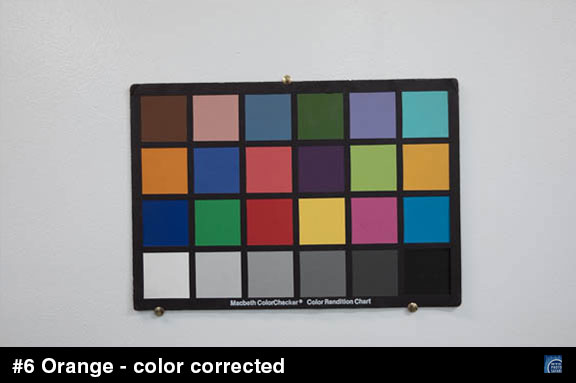 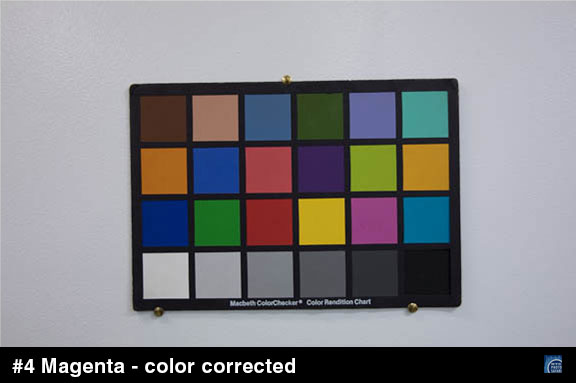 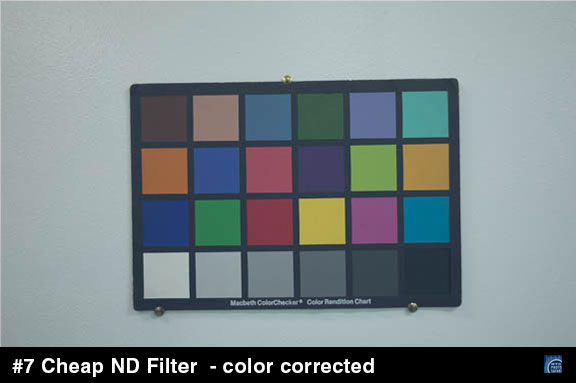 It was very curious to find that if the camera was allowed to analyze the color via the custom white balance setting, it was much more capable of correcting out the color than Lightroom. In other words, red filter was placed in front of the camera and a white sheet of paper was placed in front of the color chart (see image #3 Red White card test). The camera was set to calibrate the white balance from that image. As it turns out the jpg image produced by the camera (#3 Red in camera correction jpg) is much closer to neutral than Lightroom was able to get to. Remember, when shooting raw the white balance setting is not baked into the image, this is why there is much more latitude to fix problems in post process with raw. However when we tried to correct the image above (#3Red -color corrected) was the best we could do. As you can see the camera was much more capable of correcting out the color. But alas that is a jpg image. 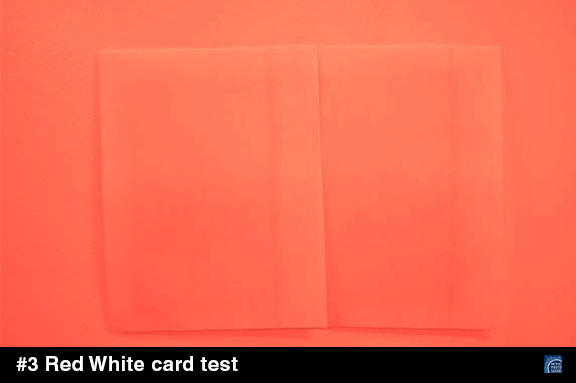 The conclusion is that although there is a lot of latitude in post, at this time Lightroom has limits. Further, although the latitude is fairly large you still need to pay attention to the color cast of your filter or your lights if there is a big color cast. At a certain point there is no turning back.