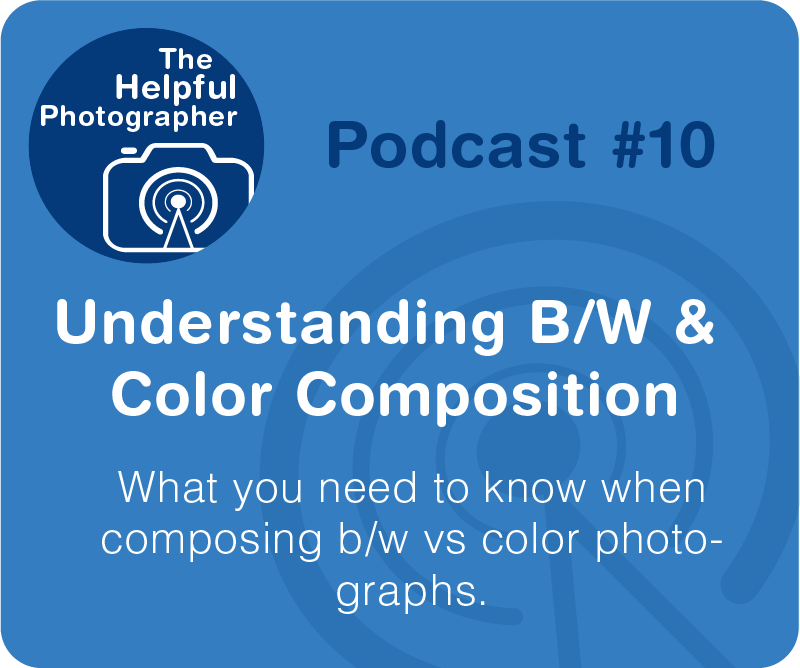 
If you haven’t listened to the previous podcast on composition please do.

Very often I am asked what I think about black and white photos and my answer is “nothing”. I don’t think it’s good, I don’t think it’s bad, it’s neither. For me photography is photography. Art is art. It can be very good, very bad and everything in between. I don’t care how it’s processed, I don’t care if it’s black and white or color or horizontal or vertical. I just want it to move me. I want it to evoke a positive feelings. But there are definitely photos of tragedies or depict human suffering which I think are amazing as well. But for the most part I like looking at images that make me feel good, but that’s my personal taste in art. Generally speaking I prefer not to look at severed heads or body parts – like what Joel Peter-Witkins likes to shoot. But that’s me.

I think to grow as an artist we need to consider how art moves us personally and then to consider how that translates in our own work. I think the definition of successful art is when it moves the viewer to think or feel as the artist intended. On the other hand some of my colleagues believe that successful art is art that moves the viewer in any direction.  But to do any of this, sometimes it means that we have to present that image as a black and white and sometimes it means we have to present it in color. So I don’t think the question of “black and white or color?” is the question we should be asking. Rather the question should be, “Does the piece work? And was it enhanced because it was presented in black and white or would it have been better in color?”

So what should you be looking for when you are working in black and white or color to insure success? When I first became serious with photography someone said that in order to shoot black and white you have to start seeing in black and white. I have literally shot thousands and thousands of frames of black and white film, and for the first THREE terms at Art Center we were not even allowed to photograph in color and I can tell you that I NEVER saw the world in black and white. It never happened for me. I think if you are seeing color? That is if you are not color blind? I don’t know how you would disregard the color information eyes are sending to your brain. I can tell you that what did happen was, I did develop the ability to look at a scene and very quickly translate what that would look like as a black and white photo. It’s almost like speaking a second language. What this skill allows me to do is to look at a scene and to determine whether or not it’s better off as a black and white or color image. Because with film I had to choose which camera I was going to use, the one loaded with color film or the one loaded with black and white film! With digital, I don’t have to make that choice until after the shoot.

So what is the difference when you are shooting and what should you be looking for? I think black and white photography is only about light and composition. Whereas color photography is those two things PLUS the addition of color. Generally what I find is that well composed images tend to be well balanced photos too. I’m not talking about having 50% of your images as this and 50% as that, it’s not a mathematical equation, it’s a feeling. And although often that balance comes in the placement of objects within your frame it’s also influenced by the light on those objects or the amount of light and dark values you have; again it’s not a mathematical equation, it’s a feeling. With the introduction of color into your work you now have to consider how the colors change the balance of that image. It’s obvious to say that we perceive different colors differently but what exactly do I mean? Let’s take the color yellow and the color green for instance. If you take an image of a person wearing a yellow shirt and one wearing a green shirt of the same tone.  You would think they were wearing the same color shirt in a black and white photo.  However if we were to view the same photo in color the yellow will seem brighter and lighter while the green one will not only seem darker but heavier. And so you have to take this into consideration when you are composing.

As I said in the previous podcast, composition is not something that can be learned by listening to a podcast. So as I talk about it in the abstract please keep I mind that composition can not be enumerated like a math equation. When it comes to art, two plus two doesn’t always equal four, and it doesn’t need to be successful.

I hope that was helpful in your journey towards better composition. Until next time, keep on shooting.