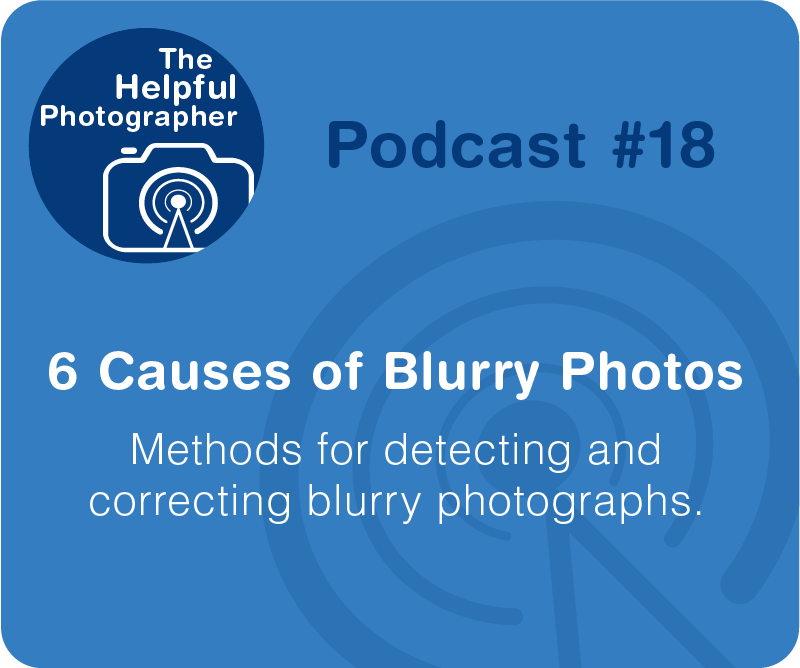 
Blurry photos can be really annoying and there are many reasons why your photos are blurry. Let’s go over them one by one.

The simplest is resolution. If you are shooting a particularly old digital camera or with very high ISO, your images will look like it has dots all over the place which make the image seem like it’s out of focus even when it’s not. We used to call this grain in the days of film. But now we call it noise, because it’s caused by electrical amplification within the sensor. You might be wondering what constitutes high ISO. That pretty much depends on the camera; if you have an old camera you might see noise low as 800 ISO, if it’s a new camera it can be as much as 10,000 ISO before you can see appreciable noise.

Another common cause of blur is camera shake and you will be able to tell this because nothing will be sharp throughout the entire photo. If you are hand holding your camera and your shutter speed is a bit too slow for your focal length and you don’t have steady hands, the image would turn out a little bit blurry. But if you are on a sturdy tripod and you know that your focus is on the money but your images are still blurry, the cause may still be camera shake. Let me explain. One of the biggest problems I see are people leaning on their tripod while the camera was in the middle of an exposure; this is a horrible idea. Another problem is the ground is moving. Either a car came by or if you are in New York City, and you’re situated above a subway line and the train comes by causing the ground to vibrate. The last thing I can think of that would cause camera shake is image stabilization. If you leave your image stabilization on this may cause a problem. Although it seems counter intuitive because image stabilization is supposed to “stabilize” the image it actually does the opposite when the camera is on a solid surface like a tripod. What’s happening is that it’s constantly looking for motion to stabilize and if it can’t find motion it will create it. Therefore the camera is vibrating just a little bit. Not enough for you to physically notice but more than enough for it to show in the photo. The solution is simple, just turn the stabilization off.

The most obvious reason for blurry images is that your subject is moving faster than your shutter speed. This becomes really obvious when everything is sharp in your image except for that animal or person, who is clearly blurry. To stop action your shutter speed needs to be as fast as the action is moving. So keep speeding up your shutter speed until you get a sharp subject.

A less obvious reason for blurry images is lens flare. Lens flare is when rays of light hit the lens at an odd angle. This can be from the sun, a reflection off a shiny object or a light bulb. These days, many photographers find it very desirable to have concentric circles or rays of light from lens flare as a part of their image,  but when it’s neither of these it renders the image a little bit gray or foggy and a tad out of focus. And when it’s one of those things it’s actually fairly hard to detect for the untrained eye, because it just feels like you have a dirty LCD. And if you do have a dirty LCD it makes it even harder to detect.

And second to last on my list of things that cause blurry images is a dirty lens. This often shows up as a foggy looking photo. It’s usually obvious when the front element is dirty because we can see that. But sometimes it’s the back element that is dirty. Most people don’t notice this because it’s the back element! Which is usually mounted to the camera. The solution is simply to clean both your front and back elements.

And lastly, in my opinion, the least common cause of blurry looking images is lens quality. With the exception of a plastic lens, if you have a properly functioning lens, for the most part it’s pretty hard to find a lens that is so poorly made that it would result in obvious blurry images. At the moment there are no plastic lenses that can match a glass lens. That should change in the future. These days, to detect a blurry image with a glass lens you’ll need to magnify like 5 percent of an image to the full size of your 32” monitor. I know I’m exaggerating a bit here but it’s pretty hard to see this if you are viewing an image at the proper distance. Now a days, people are often viewing images on a phone or a tablet which would mean that these minor problems are even harder to detect. Even for lenses that have very bad chromatic aberration problems, this is reasonably hard to detect given what most people are photographing.

There you have it, the six reasons for blurry photos, resolution, camera shake, moving objects, light flare, dirty lenses, and low quality lenses.