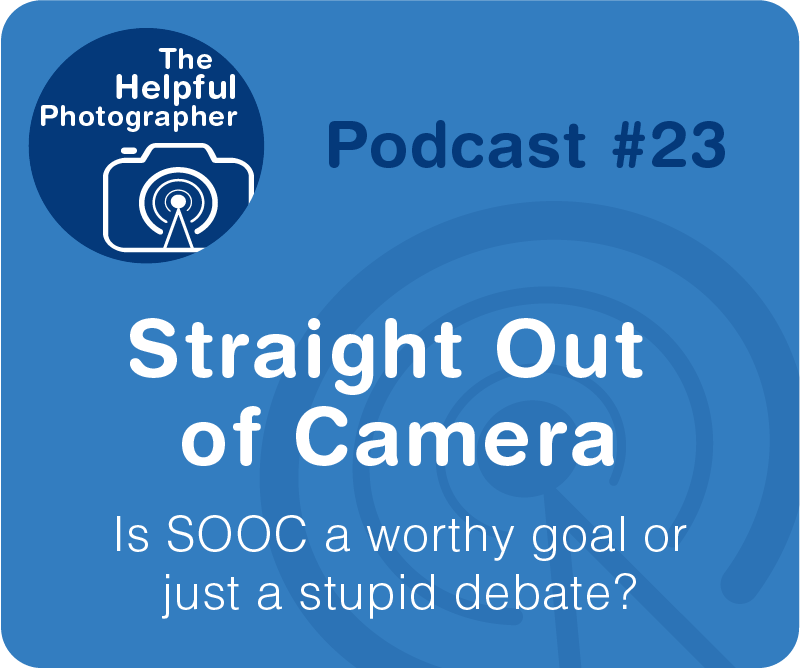 Transcript
Straight Out of Camera


Straight out of camera. The endless debate. As a professional shooter who was formally trained to shoot on film more than 20 years ago, I’ve heard all the debates about what “real” photography is and what it means. And I gotta tell ya folks, this debate is as old as photography. And it’s a tired debate. And I know what I’m going to say here will get me tons of heat and hate but I’m from New York and so I’m ready to get in the mud. So here it goes….

Lately the debate around “real” photography is centered around the phrase “straight out of camera” also known as “SOOC”. I assume that it’s pronounced “Sock” or “Souk” but I’m just gonna go with STUPID, ya know why? Because suck was just a little too obvious. Yea, ya heard me right, I said it. This phrase is used to describe images that allegedly have no editing. In other words they are presented straight out of the camera and it’s held up as the standard by which we should all strive to attain in our photographs. Which is kinda ridiculous and shall I say it again? STUPID. Yup, I said it again!

Often times I’m asked if I think the use of photoshop is “cheating” or another way of asking the same question is whether or not I think it’s wrong to use filters like what you get on Instagram. And my answer is straight up – NO, I don’t think using photoshop is cheating and I don’t think using filters in post production or anywhere is “wrong.” It just is what it is.
Before I go on, let me back up and start from the beginning. When photography became more wide spread and artists began to realize that photography could be used to do more than just create a quick head shot or a family portrait, the art community asked the question, “Is photography art?” Many argued that photography wasn’t art because it was too real and too easy. After all, wasn’t art supposed to be an expression of one’s imagination? Photography was and still is often perceived as simply documentation, nothing more nothing less, just like a map or a phone book perhaps, therefore it can not be considered art. But then when the Dada and abstract movement came along, critics argued that those forms of art weren’t real enough and therefore it too wasn’t art! So on the one hand people argued that one form of art was too real, while the other wasn’t real enough. I know you can’t see me but imagine me pounding my head on the desk here! Although I would like to believe that we have mostly matured away from these debates, I often find that they haven’t gone away, instead they’ve only shifted a bit. Today the same question is just being asked differently, and the question is not whether or not photography is art, but rather “is it photography”, so it’s the same question with a different disguise. And I find that the question is invariably mostly asked by those who believe themselves to be the arbiters of photography and art. I want everyone to remember that the artists who created the Dada movement created it as a huge middle finger pointed directly at those who thought they were the arbiters of art at the time.

I remember about 15 years ago, I was at a lecture where the photographer showed images created digitally. She was able to montage her image in camera via multiple exposure to get the perfect exposure which would have been extremely difficult in film. A person audience raised their hand and asked “But is this still photography?” And this remains the current debate. If we press the button more than once or manipulate our images in anyway after pressing the button is it still considered photography? Or is it somehow cheating? And my answer emphatically is YES, it’s still photography and NO IT’S NOT CHEATING! Ok, now that I got that out of my system, here’s what I think everyone needs to remember. Other than Polaroids, chrome or any direct to viewing method of photography, ALL film photography required some level of post process manipulation. When we were shooting film, even before we put that image on paper, how we handled our chemistry could dramatically alter the look of our photographs. From simple temperature manipulation to cross processing. And if you don’t know what cross processing is, please google it. The point is that we have always manipulated our images. Even with images that don’t seem to have been manipulated you have to step back and consider that when the printer printed the film to a piece of paper, that printer made decisions on how dark or light or contrasty or not contrasty to make the image. And furthermore both the printer made decisions as to how to crop that image because most of the time the size of the print was not proportional to the aspect ratio of the film. We have always manipulated our images. These days, we’re just doing it in a computer. And before someone argues the “fact” that they can present great images “straight out of camera” I'm willing to assume that that image was either shot on a smart phone or as a jpg, in which case the camera applied some level of post process to the image and if it was on a smart phone it was a LOT of post processing. And although it happened automatically, it none the less did happen! In my last 200,000 frames I can tell I have only ONE shot I was able to present straight out of camera. And at the end of the day it looked even better with a tiny bit of post process.

Another thing I would like everyone to consider is the use of filters. Not the digital kind but the piece of glass or plastic that you put on the front of your lens. If I put a glass filter on my lens is that any different than if I applied a digital filter that does the same exact thing? Would that still be considered straight out of camera? So the bottom line is that pretty much all images require some level of post process, so why should it be considered an illegitimate way of working?

I think the only time when it is NOT legitimate, is to manipulate an image beyond contrast, light and dark and some color, when it is being presented as a journalistic or documentary image. I do not believe it is legitimate to add something that wasn’t there, or to delete something that was there if you are a journalist or documentary photographer and are representing your images as true to life. Having said this, we have to keep in mind that the photographer chooses how and where to crop the image during the act of taking the photo, and that in itself is a manipulation of the scene. We must remember that a photograph can never be more than what the photographer saw in front of them, and that each of us sees the world differently even if we are standing side by side. When I said that it’s not legitimate for a journalist to delete something from a photo I mean like taking a person out of a crowd, or photoshopping out something that was captured. You’ll have to decide if cropping out a material piece of information is legitimate. By the way, none of this is to say that you shouldn’t try to get it right in camera. Of course you should. Getting it as close as possible to what you want the end product to be while shooting is a good and worthy goal – because most of us prefer to be behind our cameras than in front of our computer screens. But disqualifying an image because there was some kind of post process involved is just dumb. Oooops did I say that again? Yea I did.

So is it still photography if you photoshopped it? Yes, it is. Is using a filter cheating? No it’s not. The question we should be asking is whether or not we actually like the image that is being presented in front of us. And if the answer is “I like it” then great. If the answer is “I hate it” well just move on to another image. For the most part,   photographers and the community at large believe that photography is art. And I find that the argument of whether or not an image qualifies as photography to be a destructive one, both to our profession and our photographic community at large. In my opinion if it was originally created with light then it’s photography. The only question to be asked is whether or not you like it.

That’s my rant, thanks for indulging me.