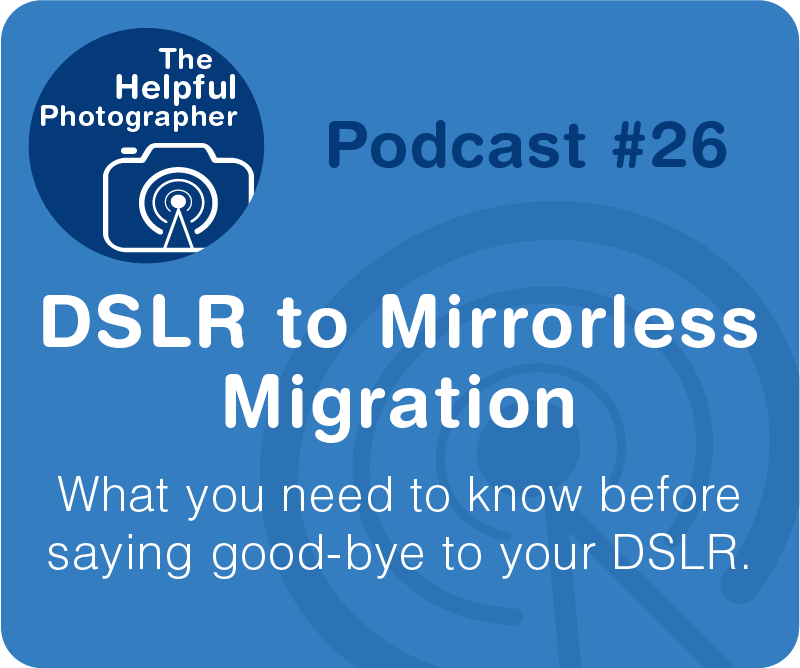 
It feels like everyone is making the jump to mirrorless cameras, so today I’m going to talk about the things you need to know as you consider moving to mirrorless. First of all the difference between a mirrorless and a DSLR is the MIRROR. SLR stands for single lens reflex, the reflex being the mirror which reflects the incoming light from the lens up into a prism which houses an array of mirrors and delivers it to our eyeball. And therefore allowing you to see the image before taking the picture. When the shutter button is clicked this mirror flips up and out of the way to allow light to hit the sensor or the film.  On the other hand a mirrorless camera removes the array of mirrors by electronically projecting the image which hits the sensor onto an LCD display. This display presented either on the back of the camera or inside a viewfinder or both. Because the mirror and the prism have been eliminated, the entire body is smaller. The benefit to this is… well obviously, size. But another big benefit is the lack of moving parts. Remember the fewer moving parts, the fewer things that can break. And everything will break at some point.

So this is kind of obvious but why did it take so long to get here? Once we invented digital technology wasn’t it obvious to make everything mirrorless? Well the fact is mirrorless has been around from the get go. Point and shoot cameras are essentially mirrorless right? So they’ve been around for a long time. But if you’ll remember in the early days of digital they all kinda sucked. Does anyone remember something called shutter lag? Remember when you would press the button and then it would fire? That was because the camera was waiting for the image to come into focus. So the technology behind the autofocus via the sensor is what made this so slow. Until now, professionals did not shoot mirrorless cameras because they just didn’t focus fast enough. But as with all technologies, they eventually get better. So today it can definitely be argued that the autofocus system of some mirrorless cameras are as fast or even faster than its DSLR counterpart.

So far so good right? So what are the cons? What are the cons? In my opinion there are still some significant drawbacks on mirrorless. They’re still very expensive relative to DSLR, but that will change over time. The other thing is they lack third party equipment. Now, I don’t generally recommend third party equipment whether we’re talking about lenses or flashes etc. But the lack of third party equipment means that the manufacturer doesn’t have any competition which means that they can keep their prices even higher than normal. But that will change over time as mirrorless becomes more popular. My biggest gripe regarding mirrorless is the drop test. Due to the way they are constructed they don’t take drops very well. I once watched a participant drop a mirrorless camera 4 feet off of a tripod onto the concrete sidewalk and it was toast. As I understand the repair bill was nearly the cost of a new body. On the other hand I have dropped my dslr 3 times onto concrete and have walked away without a problem. Just to be clear, I wouldn’t recommend dropping your camera as a matter of practice and prior to those three drops on the same camera, it had been over 20 years since my previous drop. Just so everyone knows, I’m not that big of a klutz and don’t normally drop my equipment.

My last gripe, with mirrorless is battery power. Because these cameras rely on an LCD for you to see your image it uses a lot more battery power. As a result you will need to carry more batteries than a DSLR.  This will bring the weight of your bag back up and means that you will need to plan your shooting a bit more too. But over time the manufacturers will definitely resolve this problem. It’s a pretty small hurdle for them to clear. The bottom line is the DSLR will eventually go the way of the dodo and everything is going to go mirrorless. The question is when to make the jump. And when you do make the jump from DSLR to mirrorless. I would highly recommend that you ditch all of your DSLR lenses for the dedicated mirrorless lenses. Yes, I said ALL of them. I know you can probably get an adapter that will allow you to use the old lenses on the mirrorless but I would not recommend this at all. I certainly would not recommend that you bring a canon lens to a Sony system either. The reason is because manufacturers make lenses optimized specifically for their sensors and their focusing system. The focusing system for DSLR and mirrorless cameras are different and their lenses were designed for those specific systems. So you won’t get the full benefits of the new technology if you hang on to the old lenses.

Until next time, whatever camera you have in your hand? keep on shooting.