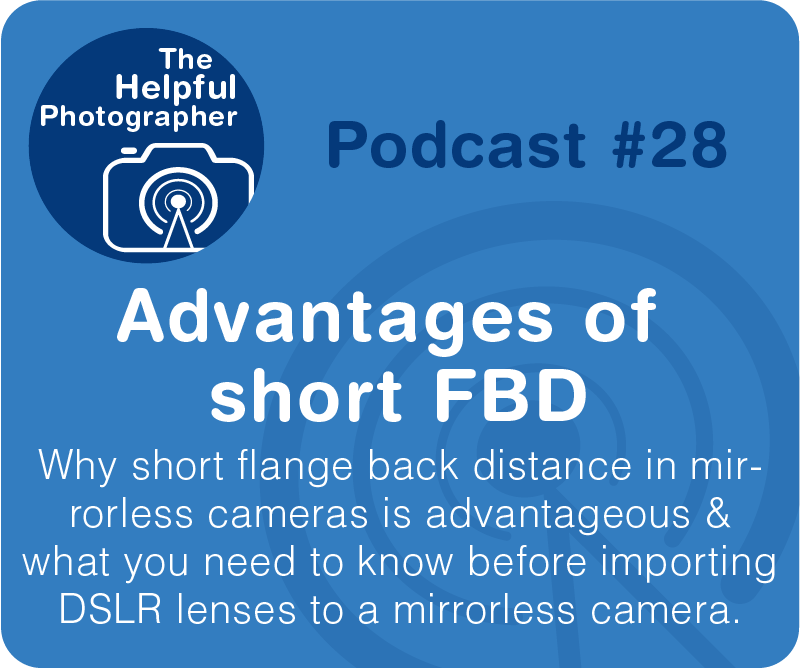 
Z: Right now the rages mirrorless love’em or hate ‘em  they’re the future and DSLR is going to be a thing of the past. The key element that makes mirrorless cameras great is that they're smaller more compact and lighter because they lack the glass prism and mirror system of an SLR. As a result one of the engineering feats they needed to get over was the short distance between the rear lens element and the sensor, also known as the flange back distance. Which got dramatically shorter due to the elimination of the mirror. For answers to my technical engineering questions I'm once again calling Dr Rebecca Theilman of the University of California San Diego.

Z:   Hey Dr. Theilmann how are you doing?

RT: I'm doing pretty good how are you?

Z: I'm doing good. Hey, thanks for coming back to the podcast. I brought you back today because I wanted to talk to you about flange back distance which is the distance between the rear element of your lens and your sensor and I'm wondering: now that it's gotten very short because of mirrorless cameras; does this create a problem for us? As far as image resolution is concerned?

RT: I don't believe so. I think actually by reducing the back flange distance, you're going to see an improvement in the quality of the images that you photograph.

RT: There's a couple of reasons why this might improve image quality of your images. One of the reasons is that you're going to be able to get more light on the sensor. So as you move it closer to the back of the aperture, what will happen is that it will increase the funnel that collects the light onto the sensor so more light means better image quality. Another reason is that by reducing the distance you will probably reduce chromatic aberration. So chromatic aberration is that blurring of colors at the edges of your images. When we last talked we talked about what is chromatic aberration and that's basically whenever light passes through glass it spreads it out into the colors that you have.

RT: Now a good lens designer will build on lens to reduce chromatic aberrations as much as possible. But what happens is the bigger the distance the larger the spread. So a decent analogy of thinking about this is, if I'm holding a flashlight and you're standing six feet away from me. You'll see the pattern of light sitting in front of you and it will be pretty small, whereas if you step to like maybe twelve feet away from me, it will increase in size. And that's kind of like how chromatic aberration spreads. So by bringing the sensor closer to the aperture that will reduce or limit the amount of chromatic aberration coming through your lenses.

RT: That is correct.

Z: I find that most of the professional lenses on the mirrorless side of things are the same size as they were in DSLR, which is huge. My question becomes, if I'm getting more light, why are these lenses so large?

RT: When we had film cameras which were primarily thirty five millimeters. The bodies and the apertures were all hard set. There was not any variation into those distances that you had. So each manufacturer was restricted to building lenses to that particular distance from the aperture to the size of the film. So you could swap out lenses from one manufacturer to another manufacturer because they were hitting the same target that was the same idea.

Z: Is up because they didn't have the 3D modeling to change that around? I mean, theoretically they could have changed the flange back distance right?

RT: Yes they could have shortened the back flange distance. But one of the things though is technology is giving us some advantages in that aspect of things, because in order to see the image we had these mirrored cameras so the photographer can see what the camera was seeing and it required those mechanics. Now, we weren't able to do that until LCD screen showed up and the computer systems that control them. So by giving another approach so that the photographer could see what the camera was seeing that they were able to remove the mechanics of the mirrorless system. Which allowed the reduction of that aspect of things. Now that the target is not the same for all manufacturers, each manufacturer can build their own base with its own back flange distance, whatever it chooses it to be, and it can change the sensors as well. In a sense each camera has a personality associated with it as in the lens designer built the lens so that the image on the target, whether it's a film or a sensor, looks the best it possibly can. But when you change the distances from the back of the aperture, the size of the sensor, and what target it is, they have to build a new lens system to give you the best image on that particular camera sensor. So you will not see a reduction in the size of the lenses because it still has to do those balancing aspects to give you the best picture that you have. But it has more challenges because it's collecting more light; it's using more of the lenses so they might be slightly heavier, to address those challenges. So that's why the camera systems haven’t gotten smaller.

Z: So this leads into my next question with regards to bringing DSLR lenses to mirrorless lenses. What's happening very often is that people are completely changing systems. So you have your Canon shooters moving to a Sony system and that's about a ten thousand dollar moved to go from one to the other because you're getting rid of all your lenses plus all of your bodies as well. So to reduce this cost what a lot of photographers are doing is they're buying an adapter to sit between the Canon lens and the Sony body. Or in the best case scenario; I suppose, with Nikon systems you can bring your Nikon DSLR lenses to your Nikon mirrorless camera with a Nikon adapter. What problems here?

RT: There's two issues that might be associated with it. One of the positive aspects of the back flange distance is you're able to collect more, light less chromatic aberration, and probably some other things. By putting a spacer and  your old lenses on the camera, you will not be able to take advantage of those improvements. You're basically duplicating your mirrored system with the mirrorless system. You're not going to get that aspect of things. The second issue is associated with, as I said each camera lens in each camera has its own personality. How blurry is it? How sharp is it? Most of the modern cameras; I'm a casual photographer, and I noticed that there is some software things you can turn on and off specifically; which is do you want to turn correction for spherical aberration, which is a blurriness in the image. Now that software is unique to the lens you're looking at. So if they don't offer an option to you as a photographer about which one system are you using. As in, was this lens design for a mirrored base or was it designed for mirrorless base? You might find that you don't seen improvement in the blurriness. When you put the old lenses on the new camera base. Now if the manufacturers were forthcoming on some of these things, they would give you an option to: old versus new on which lens system that you have and  upload the files appropriately for that.

Z: Well if they were really good they would basically bake in that algorithm into their new mirrorless cameras then.

RT: Well again it's one of those things that it has its own personality, so it would be better if the software just recognized which lens was attached to it and loaded it up appropriately. I don't know if the manufacturers themselves share that information but that's something to think about.

Z: I think in the Nikon system because they seem to be pushing the fact that they are making an adapter to bring your DSLR lenses to your mirrorless lenses. I'm going to hope that all that is baked into their new mirrorless bodies. However I don’t see that happening when you bring a Canon lens over to a Sony body.

RT: No, the manufacturers I doubt will share that information because the lens systems are probably patented and proprietary to each of the manufacturers. You will see problems swapping those out. And it will represent itself as just the images will look a little blurry. They won't look as sharp as you had anticipated for purchasing the new system.

Z: Okay so bottom line is short flange back distance is a positive not a negative when it comes to mirrorless or any camera body. And again bringing a DSLR lens over to a mirrorless system is probably not the best idea and even if they baked in the difference you're not getting that benefit of the shorter flange back distance.

Z: Well that answers the questions. I really appreciate you joining me again and I'll probably call you back in a couple weeks to ask more questions.

RT: All right thank you very much appreciate it.