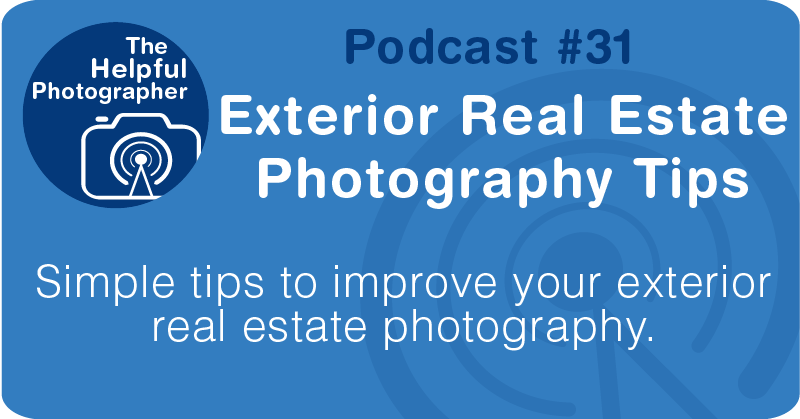 
This podcast is a follow up to last 2 podcasts on how to set up for a real estate photo. Today I’ll get into the equipment and some of the more technical aspects.

Since most architectural photography is about showing off a space and an attempt to give the viewer a sense of being in the space, rather than just part of the space, this type of photography generally requires a wide angle lens. So I tend to shoot between 16 and 24 mm which is about 10-20mm if you are shooting a cropped sensor. I’ve never understood a close up shot of a wine glass or a candle when it comes to real estate photography. It seems like a waste of my time looking at these when I’m shopping for a house. If it’s part of an ad campaign it might be useful but otherwise I don’t really see the function. This is why I don’t need a longer lens.

As for other camera equipment, I always carry a large tripod and a remote shutter release because of long exposure times and the camera is likely in an awkward position and the remote prevents me from having to constantly climb back up the latter to the camera. If you don’t have a remote shutter release I would recommend using a timer. The reason why I shoot on a tripod is because I’m often shooting between f/8 and f/16 to insure as much sharpness throughout the image as possible; as for ISO, it’s usually at a static ISO of 100 to insure better resolution; so the combination of these two things often result in fairly long shutter times, cause let’s face it, these indoor spaces are often very dark. All of these things together demand that I shoot on a tripod. I also generally shoot in Aperture priority if I’m shooting with existing light. However, if I’m bringing in my own strobes I’ll shoot in manual.

My last bit of advice is regarding light. Most of you won’t be able to or have any inclination to follow this advice but you should be aware of this anyway. For the most part you will want to have any small table lamps or floor lights inside turned on because it makes everything feel homier and more lived in. As far as ceiling lights are concerned, you’ll have to decide whether or not you want to or need to have the ceiling lights on. If your ceiling lights are throwing too much light, you can fix this buy using the dimmer to turn it down a bit or possibly even changing the bulb for less wattage. If neither of these are possible, you can simply turn the light off in the middle of the exposure. However this would require that you have a long enough exposure to be able to do this. It’s a little tricky but it does work. A more difficult thing to do would be to filter the light itself.

Something you’ll want to pay attention to is that indoor lights usually have a warm color cast; the problem with this is that the natural light from the windows is rather blue. If you have a strong yellow color cast inside relative to the natural light, you’ll want to change the light bulbs or add a filter to the lights themselves so that it’s not so yellow. How much you want the indoor color to match the outdoors is up to you; but you definitely don’t want it to be totally blue outside while the inside is yellow – that is if you are doing an interior shot. However this is sometimes a nice affect if you are doing an exterior shot; since this is a podcast I can’t show you an example; so you’ll just have to trust me. And lastly, you’ll probably want to time your shoot so that there’s not direct sunlight coming in through the window. If you don’t, then you are going to definitely have a lot of post processing to deal with, especially if you don’t understand HDR or you don’t bracket properly.

And that’s pretty much it. Although architectural photography seems like a gimme it really isn’t. I think it’s one of the more difficult types of photography as there are so many moving parts. So practice a lot and until next time keep on shooting.