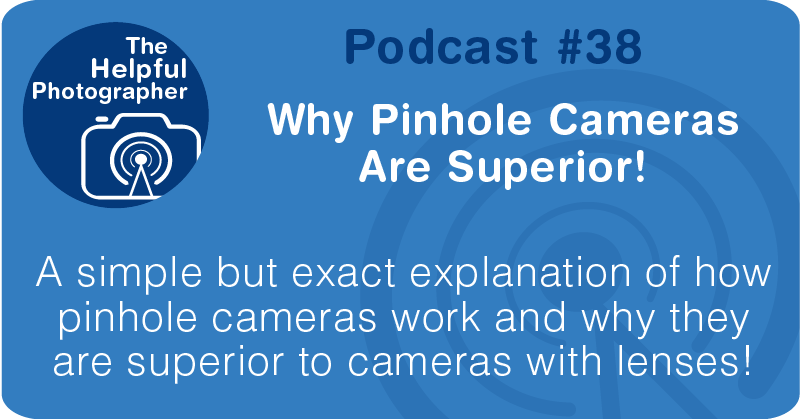 Transcript
Why Pinhole Cameras Are Superior #38


Zim: Pinhole cameras are the simplest cameras you can possibly make and you can make them out of just about anything. When I was at our school studying photography everyone was required to make a pinhole camera at some point during our career. But the physics behind a pin hole camera has been eluding me. So today I've invited Dr. Rebecca Theilmann back to the podcast to talk about pinhole cameras and how they work. Dr. Theilmann has a PhD in optics from the University of Arizona and is currently at the University of California: San Diego. Hey Doc! Thanks for joining me today are I brought you back so that we can talk about pinhole cameras.
I’ve made pinhole cameras before especially when I was in college, but I really have no idea how they work. You have this tiny little hole and a box where your film sets and magically there's an image on the other side but there's no glass. How does that work?

RT: Okay so how does it work? When you're taking a picture of an object the idea is to get light scattered off of that object onto your right? The idea is that it needs to be eliminated to see much of anything. So what a pinhole camera does is that in normal natural circumstances light is scattered everywhere. The sky, the road, the person next you. Things like that, and you don't want that light entering your image. So a way of doing that is removing light from surrounding sources other than the object you want to take a picture of. And the simplest way to do that is with a pin hole. And that pinhole removes light from scattering sources.

Zim: Okay so I just had the light bulb moment because I've been thinking about this for twenty years and I couldn't figure out how this works but you just said it.
And I just figured it out. I saw a Youtube video where a guy made a pinhole camera out of his office. On one side of the office was wall to wall floor to ceiling windows and he blacked out all of the windows except for a small hole. On the wall opposite the windows you could see an image of the parking lot and I couldn't figure out how that worked because without the windows blacked out it's just a white wall. We don't see the cars in the parking lot projected onto that wall; and I just figured out that that's because it's a top the field issue. Light is scattering everywhere and that's why we don't have a sharp image on the wall. By blocking it all out and essentially reducing our aperture to a little hole we can now see a projection of the cars in the parking lot. Am I right?

RT: You are right.

RT: Yeah, as long as you remove light from surrounding sources, which are scattered from anything other than what you want to see, you can actually get an image through a tiny hole.

Zim: So essentially our eyeballs… everything we're always looking at a reflection off of surfaces, unless you're looking at the light source itself right? We see the cars in the parking lot with our eyes because light is reflecting off of the cars and therefore it's reflecting on to the wall but because it's so scattered, our eyes have basically on scattered that light that's why we see sharp. But that wall and the windows uncovered is scattering the light so much that we don't see an image of the parking lot.

Zim: So why make a camera with glass?

RT: Well, the deal is it's an illumination game, right? The idea is that you may see the parking lot through a tiny pinhole. But it will be quite dim. I mean it takes a lot of light in order to create an image. When you have glass what that does is collect the scattered light in a predictable manner to create the image. So instead of sitting around for maybe a day to get a picture, you can get it down in a second or less.

Zim: But we know that glass causes problems too, because anytime light comes through glass, remind me what kind of problems we have? Chromatic aberrations and what else?

Zim: Okay so with lenses I can get a zoom lens and I can make objects seem closer to me and further away from me how do I control that with a pinhole camera?

RT: Okay this is also another snarky bit. You have to move the pinhole closer to the object. And then you move farther away. So your focus is your feet.

Zim: So does it matter how for the hole is from the sensor or the film surface?

RT: Yes it does. The size of the image on the sensor or film is directly related to the distance it is from the pinhole. The closer it is to the pinhole, it’s smaller. The bigger distance, the bigger the image.

Zim: But also as you move the sensor away from the pinhole does that scatter the light more?

RT: No. The pinhole just removes the light from surrounding sources. So the image might be dimmer because light is spread across a bigger area, but it does not affect anything else.

Zim: So I heard that when we got pictures back from Pluto several years ago, those images were produced using a pinhole camera. Do you know anything about that?

RT: Actually that was kind of cool. I thought that was a real hit designed by the people at NASA and JPL. Pinhole camera how simple can you get? So there's no distortions, no smearing, no anything like that. And as it did its fly by Pluto, it collected light through a pinhole camera and was able to take these brilliant pictures with it.

Zim: Okay so I assume that what happened with the NASA probe is that they probably just built a metal box with a fixed length between the hole in the front and the sensor behind. And that thing can get hit by an asteroid and you're not going to change the focus, shall we say, of the image, right?

RT: Correct it's a very very simple system. A hole and a detector array.

Zim: Yeah okay so another problem with lenses is that if you drop your lens and they're misaligned there goes your image.

RT: Yeah no lenses it's just a hole. Yes so the Pluto fly by was just fantastic work by NASA and JPL but what a lot of people don't really notice is that that they carry pinhole cameras around with them every day.

RT: Yup and if you look at your camera phone those are pinhole cameras.

Zim: But there's a piece of glass in there. I know because I shattered when the other day.

RT: Okay. Well the piece of glass like the cover doesn't cause a problem and there is a tiny little lens to help capture more light. But they’re all pinhole cameras. Very very simple, they produce very sharp images and with the detectors how are they are nowadays sensitive to the light that they collect? They get pretty brilliant pictures.

Zim: So essentially the glass, even though it’s got chromatic aberrations and spherical aberrations et cetera, the point of the glass is to basically focus more light into our sensors so that we don't have such a long exposure times.

RT: That's pretty much it.

Zim: Well I think that's it. Thank you so much for joining me and explaining pinhole cameras I'll give you another call maybe in a couple months when I have more of these questions.

RT: Thanks for having me on. I really enjoy these chats.