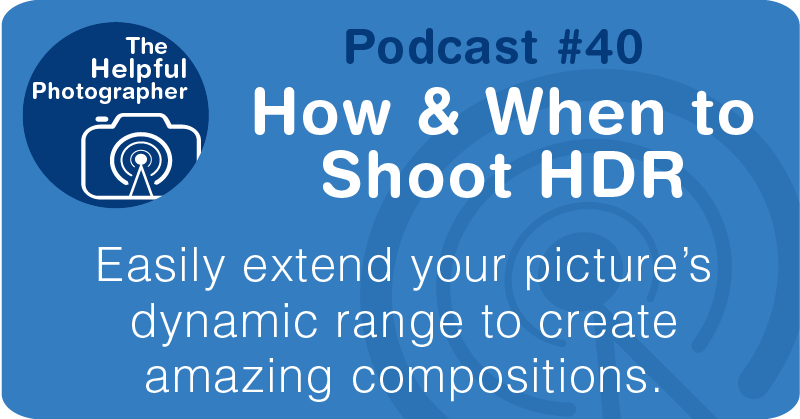 What is HDR and when should you think about using it? HDR stands for High Dynamic Range. The fact of the matter is that our eyes and our brains can see and process a far greater range of tones from lights to darks than any conventional film or digital sensor. In other words we can see far more details in the really dark spaces and the really bright spaces than our cameras can in any one image. This is most evident in clouds. Have you ever taken a landscape photo and the nice puffy clouds with all those great details end up being just a giant block of white? This is due to a lack of dynamic range. One of the best ways to overcome this problem is to bracket your shot. Bracketing means that you will shoot multiple exposures for any single image. In other words for any single image that you want to increase your dynamic range you would take an over and under exposure in addition to the middle exposure. By doing this, your over exposures would help bring out the details in the dark areas while the under exposures would bring out the details in the light areas. And then in the post process you take all these frames and you combine them for the perfect shot. The key is that your camera is not capable of processing this much information in a single shot. That’s why you have to combine it in your computer in your post processing.

Normally we think of a bracket as a total of three exposures, separated by only 1 stop. In other word you would have a middle or normal exposure in addition to that you would have an exposure that is 1 stop brighter and another one that is 1 stop darker. Although this is the common practice it does not mean that you have to adhere to this. Nothing says that you can’t shoot 5 frames or 7 frames or that you have to do a one stop spread. You could do a 2 stop spread and do a plus 2 exposure and a minus two exposure. The key is that your exposures have to render details in the brightest and the darkest areas. So if you negative 1 stop exposure still leaves the clouds blown out, then you will certainly need a negative 2 or negative 3 stop exposure to make sure that you have all the details you need in those clouds. So essentially what you are doing is you is filling in the blanks with each subsequent exposure. This is how you determine how many exposures you need and how wide your spread is. Let’s say you shot a 3 bracket at a negative 3 exposure, a zero and a positive 3 exposure. You did this because it was the only way to get in the clouds. The problem with this is that it’s such a large spread that a lot of the details in between probably didn’t get captured so when you combine the images in post process it may still not give you all the details you want. So again, think of each exposure as filling in the blanks.

Many of you will notice that there is an HDR function in your smartphone. The fact is that it is doing EXACTLY the same thing. When you press the button, the phone will take multiple pictures at different exposures and combine them automatically for you. This brings us back to the post process. In the old days, you would have needed to shoot on a tripod because you needed to make sure that every frame was exactly the same, because in post process you had to stack the image together manually and made sure that everything lined up exactly the same, which made it nearly impossible if you were handholding your camera. But now through the hard work of software engineers, our post processing software will stack the images for us and make sure that everything is aligned perfectly with the click of a button! And it’s even smart enough to scrub out that kid that ran through one of your frames! Cause that’s never happened before! Not.

Also when you decide that you are going to stack images to extend the dynamic range of an image you’ll want to shoot in RAW because raw gives us the most dynamic range available. You’ll also want to stack it in raw and post process it in raw as well.

As you can see, HDR is a great way to extend the dynamic range. But before you go crazy with HDR and spend too much time trying to get all those great details out of you every single part of your image? Do consider your final output. In other words are you just the medium in which you are going to display your images on the internet where everybody has to view your images via a screen? Or are you actually going to print it to a paper media? You should know that most printing processes have a much shorter dynamic range than your computer monitor. So if you are working really really hard to get all those great details in the dark areas of an image and then print it to canvas, you’ll notice that those black areas are still just a block of black. So do take your final output into consideration before you put too much time into getting those details in your shot.