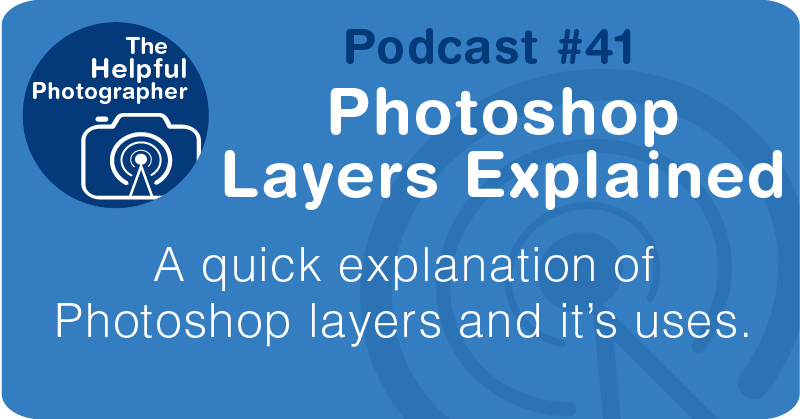 A lot of people tell me that the biggest stumbling block to understanding Photoshop is layers. It’s actually quite easy. So let’s jump in.

Imagine this. Let’s say you found an old photograph in a box. Yes, I’m talking about a printed photograph, the old fashion way. And this is the ONLY copy you have and you have, but this isn’t the best print and you would like to make some changes to it. You could pull out some paint and just start painting right on top of it, but you know that you’re not very good at it. So instead of painting directly on the print, which would change it permanently, you take a piece of glass and you put it on top of the photo and you paint on the glass instead. And every time you make a change you put another piece of glass on top. As you look at the image through the layers of glass you’ve put down on top the effect is cumulative. So the photo is a culmination of all the layers on top of it. If you had filled one of those sheets of glass, let’s say with red paint, well guess what? You would now have a red image; you would no longer be able to see the original image on the bottom. However if you just wanted to tinge the image red you would put a very thin transparent coat of red that sheet of glass just like rosy colored sunglasses. In this way, if you decide you did not like effect of any sheet of glass then you would simply remove that sheet of glass. This would leave your original image intact. What you are doing with each sheet of glass is what layers is to Photoshop. It’s like putting a sheet of glass on top of your image where you’ll make all of your changes. So if you make a mistake or if you don’t like what you did you can simply remove or change that particular layer. Just like removing a sheet of glass.

The nice part of Photoshop layers, is that you can turn the layer on an off by clicking the eyeball symbol next to the layer. As you toggle this symbol you can see what it looks like before and after. And if you don’t like the layer at all you can simply delete it or turn it off for the time being.

One of the great uses for layers is watermarking. By adding your logo or signature on a layer above your image, you can move it around, change the size or the opacity as you see fit and then export the image to a jpg or a tiff to permanently embed it before it’s shared.  And if you don’t like down the line, you can go back to your Photoshop file and change it with ease, as it sits on its own layer and not embedded into the image itself.

As you can see there’s a lot you can do with layers. The main reason you will want to work in layers and not on the image itself is because edits in Photoshop are considered destructive. In other words once you make a change, save it, and close the file it’s basically permanent. To reverse your edit you would have to literally retouch the image. And since most of the time when we’re working in Photoshop we are making multiple complex changes this can be very problematic. Let’s take the watermark example. You’ve now placed your watermark where you want it, but you don’t use layers, and then decide to change the contrast and saturation and so on. You have now changed the entire image including that watermark. And if you decide that you placed the watermark in the wrong place you have to undo all of your changes including the contrast and saturation of the image to undo the watermark. AND this is only possible if you did not save and close the file. On the other hand if you had done these things in separate layers then you can simply delete or disable the layer. In the watermark situation, you would simply move the watermark to the top layer so it is not affected by any of the contrast or saturation changes. Again if you didn’t do this in layers, it’s like pouring paint on a print, and then trying to remove that paint after it dries.

One more thing about layers. When working layers you can also add something called a layer mask. Let’s say you have a photo of an apple and you want to darken the background but not the apple itself. What you can do is add an exposure layer to image and then create a mask. The mask would be placed over the area you do not want to darken, in this case the apple. Or you could reverse the mask and only darken the apple and not the background. In this way you can control which part of the image the layer affects. There’s a lot more you can do with layers, but for now I hope that took the stress out of using Photoshop. That’s about it for layers! Just remember that it makes changes reversible and the effects of a layer are cumulative just like adding more and more sheets of glass with more and more layers of paint on it.