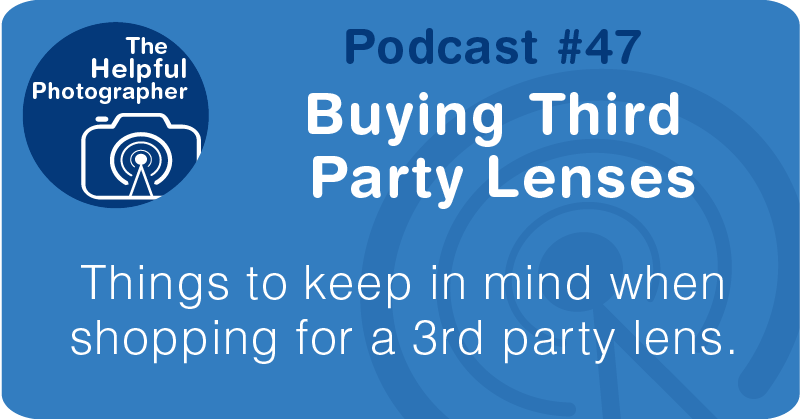 Photographers who have met me on a NYC Photo Safari think that I have a beef against third party lenses. And the fact is I do. After hundreds of hours of hands on experience with literally thousands of third party lenses I have come to the conclusion that they are generally not worth the savings and I’m going to tell you why. But before I do, I want you to note that I will not mention any particular brands, because it just hasn’t made a difference.

What you should know is that glass engineers today have three D modeling which they did not have before the digital age. And as a result they can design sharper and sharper lenses with fewer and fewer aberrations. They know the exact specifications of the camera bodies and sensors they are designing these lenses for. And the results are lenses with fewer problems. On the other hand third party manufactures have to reverse engineer these specifications to design their lenses. My question is, “Would a third party manufacturer be as capable of making lenses that fit like a glove with a body they do not make?” I would assume they could get close but probably not as tightly as the OEM. OEM stands for Original Equipment Manufacturer.

Another issue is when a third party manufacturer designs a lens, I want to know which manufacturer’s sensor are they designing it for? Do they just choose one arbitrarily and then change the lens mount or do they design each lens for each brand of camera they are compatible with? I don’t know, but this is incredibly important because we are a digital sensor that is proprietary to each manufacturer. Also, remember the flange back distance which I discussed in a previous episode? It’s the distance between the mount and the sensor, I get the feeling that this is also built per the sensor and it changes from camera to camera. Do third party manufacturers take this into account for every lens they make or again, do they just change the mount?

We also know that when you mount a lens on a camera body, the body knows which lens you have mounted to the camera and makes a variety of calculations based on that information to help insure a sharper image. Everything from pushing towards the sweet spot of the lens to correcting for aberrations and vignetting to shutter speeds. I’m willing to assume that the camera manufacturer will not be plugging in these specifications for all the third party lenses available.

One of the problem that I have seen very regularly, is the camera’s inability to quickly hook in the focus when there is a third party lens mounted to it. Rather than taking a fraction of a second to focus, it can take several seconds. Although I see this across the board I see this most often with longer lenses. In other words the lenses that then to be a little more expensive.

When I tell people all of this, there is always someone who tells me that they have a third party lens and they don’t experience any of these problems. Again, if you are shooting wide, you are less likely to experience the focus issues. As for the other issues here’s what I’d say: what you are shooting and how you view your images will dictate how amplified these problems are. If you are not doing any major cropping or large scale printing of your images, you may not notice these issues either. Lastly, although the problems are there, most photographers don’t study their images and therefore don’t recognize the problems. This being the case, it could be argued that this is mostly an academic discussion. To that end I would agree. But I would still argue that it is likely that your images are missing that little bit of spice or that little bit of zing that a better lens would give you.

So if you are getting images that meet your needs and you are satisfied with its performance then there is no reason why you shouldn’t save a few dollars. And to be really honest my biggest beef with third party lenses is not the aberrations issues or the sharpness issues, because those are actually really hard to detect. My biggest beef is the auto focus. I have had too many experiences with third party lenses that just refused to focus in timely manner and it just drives me nuts. I cannot reiterate enough, I have literally handled over ten thousand cameras with all manner of third party lenses and the auto focus have been consistently slow when those cameras came loaded with a third party lens. Unlike aberrations, this is a very noticeable problem.

And again, many will say that they don’t notice this problem either. But most people own what they own and they don’t get a chance to play with different cameras. And without that frame of reference you would never know that you had a problem. Since I’m constantly in front of different cameras I definitely notice the difference. And you’re just going to have to take my word for it when I say “There’s definitely a difference!” And for some who do notice the difference they are often not bothered because they are often shooting static objects. In which case they have the time to wait for the focus to hook in.

As a professional shooter I find these little issues add up and not only do I want every advantage possible, I also don’t want to take the enormous research time to figure out which third party lens might do as well as OEM, so I can save a few dollars on a piece of equipment I’ll probably use every single week and keep for over 5 years. And for those who ask, “Why not shoot prime and really get the cream of the crop?” Because for me, the shear back pain of that many lenses and continual lens changes isn’t worth it. As you can see there are tradeoffs and each of us will need to decide which tradeoffs we are willing to put up with depending on the results we want achieve.