How to Photograph the Moon & Stars #50

Photo Tips Podcast: How to Photograph the Moon & Stars #50 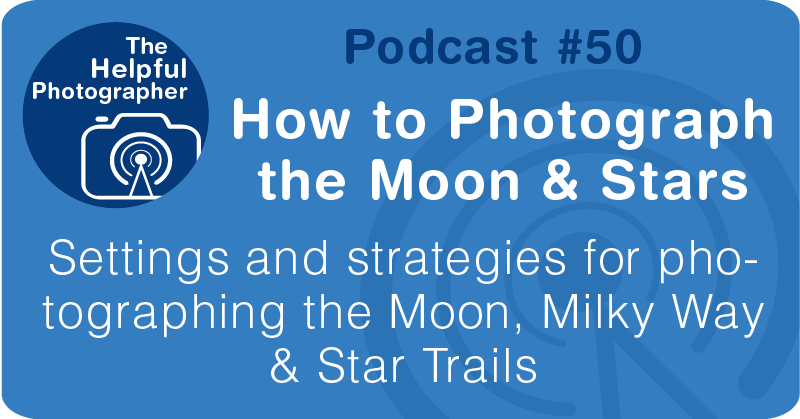 Transcript
How to Photograph the Moon & Stars #50

Zim: Today I am joined by Anthony Cook. Tony was the astronomical observer at the Griffith Park Observatory for over forty years. Originally he start photographing the night sky on film, now he's moved to digital. I first met Tony in the nineties when I worked for the Observatory as a photography assistant; Tony was my boss. Hey Tony welcome to the podcast!

Zim: All right so let's get right to it. Over the years I've had a lot of people ask me tons of questions about shooting the night sky and in particular, every time there's a full moon out, somebody wants to know how to shoot the moon. So if you're shooting with a 400 millimeter lens, I want to know what is the slowest shutter speed you can shoot that at and still get a sharp image and not see that it's moving? Because you know both the earth and the moon are moving at the same time.
Tony: Okay so it's 400mm it takes about 1/10th of a second or so before you would notice any blurring. Even at highly magnified view. Fortunately that's a lot longer than you need to record a full moon.
Zim: Fantastic so we're talking about 400mm on a full frame sensor right?
Tony: Yes.
Zim: One of the key problems that we find shooting the moon is it doesn't quite fill up the whole frame. At four hundred millimeters on a full frame sensor it's even less than a third of the actual frame. As a result of this if you're relying on your camera's metering system to take that exposure, what happens is you get a lot of the night sky. As a result your entire exposure is a little bit skewed. In your experience what do you find the proper exposure to be for the moon?

Tony: So are we talking about a full moon or a quarter moon?

Zim: Oh right, that would make a difference wouldn't it?

Tony: Yeah because even though, for instance, when the moon looks like it's about a quarter moon and it looks like it's half lit, really it's brightness is only about 1/8th as much as it is when it's full so it makes a big difference when we're shooting the moon.

Zim: It so I'm talking about a full moon.

Tony: All right, so a full moon is basically like a big rock lit by the sun. Say we're shooting at f/16 with our 400mm lens, the exposure time would be about 1/125th of a second.

Tony: Yea! So that's a handy way to remember it. Yeah like I said earlier, it is a rock being lit by the sun. Now it can be a little bit off from that, so you might have to bracket a stop either way from it, depending on how high the moon is in the sky. Just because our air absorbs some of the light in it and you know it dims the moon when it’s low; it looks brighter than average when it's high over head.

Zim: That's fantastic because essentially anywhere you are in the world the full moon every single month is fundamentally going to look the same.

Tony: Okay, now sometimes you hear about super moons or mini moons, and it turns out that doesn't affect the exposure just because the surface brightness of the moon stays the same. So it will be, up to fourteen percent smaller but the brightness is no different. The only reason I mention it is that newspapers recently have been making a big deal about it every month, I call it a hyper moon for devious reasons. But you know as long as it gets people looking at the moon I guess it’s fine.

Zim: Okay so I remember in the nineties you used to head out to the high desert to take pictures of the night sky. Is there a reason why we gotta go so far out?

Tony: Yes the main reason is light pollution because whenever you're near a populated area, it’s always lit, and the glare from lights spreads through the sky. Just like sunlight scatters in the daytime, city lights scatter in the night skies, so it limits the number of stars that you can see.

Zim: So I heard that LED lights are actually making it harder to find really dark spaces even hundreds of miles from the city.

Tony: That's right. LED lights spread light across the whole spectrum and it's really kind of like daylight expanded in out from cities.

Zim: So if you're even getting like pollution two hundred miles out of Los Angeles how are all these people getting these amazing pictures of the night sky.

Tony: Ahhh well that’s where technology has coming to the rescue. There are filters you can clip into your camera that actually eliminate most of the artificial glow and let’s through the natural unique colors coming to us from the universe.

Zim: I guess we'll have to do another podcast on those filters and how to eliminate some of these issues.

Zim: He's doing that because of filters you think?

Tony: Yes, he just has the newest filters because they're actually coming up with new formulations of filters as lights change in cities. And they just work amazingly well. Most people consider it sort of write off that you can't do that kind of photography in the city, but that's actually not true.

Zim: Okay so let's say you're far enough from cities and most of the light pollution is gone and you want to shoot the Milky Way. What's your base setting for that and is that a pretty constant thing?

Tony: Okay well first of all, you might need to experiment a little bit with your camera but I would try you like ISO 800, f/2.8 at 30 seconds. Just look at your results and then adjust from there, but yes the settings will be about the same from night to night.

Zim: If we were shooting the moon at 1/10th of a second before we can see visible motion, you're now suggesting that we shoot the rest of the sky at 30 seconds, we're not going to see a blurry star?

Tony: Well you know you would at 400mm but actually for shooting the Milky Way, and remember the Milky Way covers the whole sky. You want to use a wide angle lens because that image is so wide you could shoot probably got half a minute or more before you see any motion of the sky. Maybe even experiment with a minute depending on exactly how long your focal point is.

Zim: Speaking of motion, one of the images that so many photographers ask me about when we’re shooting the night sky is, “How do we get that image with the stars trailing like it's moving in a circle?” And in those images I see online there always seems to be one spot in the sky that's not moving. What is that?

Tony: Here in the northern hemisphere that spot you see not moving as the north celestial pole marked by the north star. And it's just where the axis of the earth points, as the earth turns everything seems to rotate about that point and if you photograph centered on that you'll see everything is beautiful concentric circles moving around the North Star.

Zim: So how long exposure do you have to have to get a complete circle of the stars around the North Star?

Tony: Well if it were possible it would take twenty four hours to get that full circle.

Zim: Oh that's right. Sorry about that, I hadn't thought about it. Okay, so how long exposure would you have to have to see a visible trail?

Tony: So in an hour, stars track about fifteen degrees, or you know 1/24th of a circle. So you have to decide how long you want the arcs to be. But there's an additional problem that if you try keeping your camera open for a whole hour and one exposure, the image will degrade you'll got noise and a lot of artifacts in the image that'll be very unattractive. So you have to have another plan for taking that picture.

Zim: So how are photographers getting these amazingly clear images? How the overcoming this noise issue?

Tony: Okay well what we're doing is taking shorter exposures and combining them together. So we take a thirty second exposure and then follow it by another one, but you have to have also enough time for the image to write from the camera to the card. So you need a little bit a gap between each exposure. For instance use a 30 second exposure and a thirty two second interval and you'll end up with a continuous stream. In that two seconds between each exposure there's not enough of a gap to show up in the picture.

Zim: So basically you're shooting multiple exposures for a long period of time perhaps one or two hours is that correct?

Zim: So by my calculation if you're doing like a 2 hour exposure, you’re close to 240 images. Are you telling me that you're going to take all those images and you're gonna stack them or layer them into one shot?

Zim: And what software are we using to do this?

Tony: Okay, so we can use Photoshop to stack all these images together. You could also do this with light room and even automate the process and there's other specialized software that you can find by searching that are really just made for star trails.

Zim: Okay, so we're running a little short on time and I want to go ahead and recap some of the things we talked about today shooting the moon: sunny sixteen rule that's f/16, 1/125th a second, and ISO 100; if you want it a little bit brighter open up, if you want a little bit darker close down.

Tony: For the full moon.

Zim: On a full moon of course. If you're shooting the Milky Way 2.8 at about ISO 800 at 30 seconds is a good starting point. And if you want trailing stars you better set up on an interval timer for one and a half to two hours to get that shot and make sure you have batteries set for that.

Tony: So one other thing is you have to turn off your noise reduction so that you don't have pauses before you can expose again.

Zim: Right noise reduction takes as long as the exposure. So if you have a 30 second exposure it's 30 seconds worth of noise reduction time. Okay fantastic Tony, thank you so much for joining me. I'm probably going to call you back next week for another discussion about using software and things like that.

Zim: Alright catch you next time!