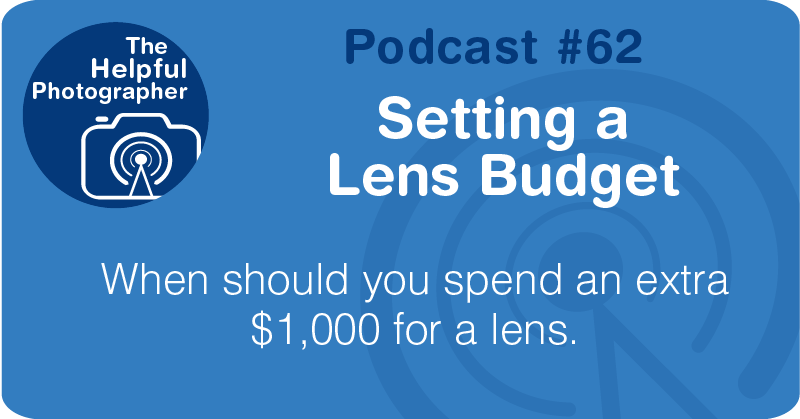 So when is it worth spending $1000 dollars more for a lens? When is it worth spending more for anything? This is a really tough question to answer and it all depends on your priorities, your budget and your tolerance for physical pain. Yup, I said physical pain.
When it comes to lenses, in general the “better” the lens the more it’s going to weigh,if we are comparing apples to apples. And by better I mean sharper and faster lenses. By faster I mean that it is capable of gathering more light. And faster lenses usually mean sharper glass elements as well. But to get those two things the lens usually has to get bigger. And by bigger I mean a lot bigger. Take the Nikon Z 50mm f/1.8 lens, it weighs 415 grams while the f/1.2 version comes in at a whopping 1,090 grams!! Holy cow! So instead of asking if someone can afford the extra $1000, the first question I always ask is are you willing to put up with the extra weight? By the way the f/1.8 is about $600 while the f/1.2 is almost $2200! So it’s more than twice the weight and three times the price.

Several years ago a friend ask me to help her purchase a lens. It was the Canon 70-200mm f/4.0 lens. I suggested that she upgrade to the f/2.8 as it is a beautiful lens which I absolutely love. But she declined due to the weight. Although I really felt this was a mistake, she was and has been incredibly happy with it and has never looked back. As a matter of fact whenever we’ve traveled together she has always looked at my big ol’ 2.8 and just shakes her head; happy as a clam that she is not lugging that around. So for her the weight of the lens was a much bigger concern than the sharpness or the speed issue. So now, whenever I advise people about lenses I also point out this problem. For many, the additional weight is not worth the benefits.

Ok, so what are the other benefits? Well, one way to make the lens faster is to make it sharper. So you get that, but most photographers will never be able to capitalize on that little extra bit of sharpness. And I always love the portrait shooters who are shooting the f/1.2 and then blur everything out in post process because they like that look. Or they print on cavass which means you’re never going to see that sharpness… ever! A lot of photographers claim that they need the shallow depth of field. But depending on how close you are to the subject, you may only see a half ounce of difference. But the problem is as you get closer to the subject and your depth of field gets shallower it will be increasingly difficult to hold focus where you want it. Many will argue that you should never shoot a lens wide open and in the least you need to close down all lenses at least one stop. The reason for this, is that you find more lens errors when you are wide open. This would affectively make an f/2.0 lens f/2.8, a f/2.8 a f/4.0 so on. So if you really need an f/1.8 you should buy an f/1.2. That’s the argument. And this I would have to agree with that. But again, a one stop difference is really rather minor. But if you need it you need it; I get it.

The last thing that many will argue is that the Bokeh, or the the actual “quality of the depth of field” is better. But the word better is extremely subjective. I will say that it is different. The fact is that the Bokeh is dictated not by f/stops but by engineering differences. If you compare the 2 lenses with the same exact specifications, let’s say two 50mm f/1.8 lenses made by two different manufacturers. What you will find is that the “quality of the depth of field” or the Bokeh will look different at the same f/stops. This is due to the differences in the shape of the aperture and also the glass that make up the lens. Which is prettier? Is completely subjective. If you think the f/1.2 is prettier than the f/1.8 I can’t argue with that. As it’s just a personal preference.

So is spending the additional $1,000 worth it? I’ve laid out the advantages and disadvantages; you’re going to l have to decide that on your own. Good luck.