How to Win Photo Contests #65 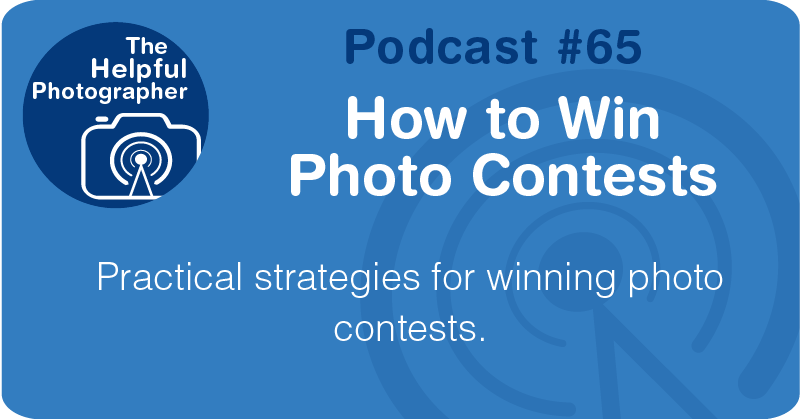 A lot of photographers love entering photo contests. And there are a lot of them out there. Whether you are entering a contest with prizes or just your camera club’s monthly contest, there are a few things you should keep in mind if your goal is to win.

The first thing you need to know is that you are playing to an audience. Remember, it's not about whether or not you like the photo, it's about whether or not the judges like your photo. Judges are humans with likes and dislikes. They are all subjective creatures. So a little bit of time researching these judges can go a long way to helping you win a photo contest or at least place in a better position. It would behoove you to understand their background and their biases. If the judge is an artist then you can look up their work on line. There you will find a treasure trove of information! The colors they tend to use in their own artwork means that there is a color pallet they gravitate to. Do they prefer vertical or horizontal images? What subjects do they tend to depict in their work?

On the other hand if they’re not an artist but an art director or editor what industry do they work in? Do they work in fashion? Or music? Automotive? Food? If your image can peak that interest then you’ll probably have a better shot at it. Very occasionally the judge or judges won't have an art industry portfolio that will help you. But perhaps they have a Twitter or Instagram account that will help inform you of their likes and dislikes. If the judge seems to enjoy beach vacations, wouldn't logic dictate that photos of the beach or a sunny vacation spot give you a leg up? If you find a Twitter post about how they hate spiders and you submit a photo of a spider, will they still be objective? As you have noticed, so far I haven't mentioned anything about settings or depth of field or focus. That’s because none of these things will matter if that judge is arachnophobic and you present a photo of a spider. Although it is easier when there is only one judge versus a panel of judges, I think it’s still important to do a little bit of research.

Beyond all of this you just need to put your best photo forward and walk away. Depending on how much competition you have the whole contest really can come down to luck of the draw and has nothing to do with how good is. Let me share a story with you. A while back, I sat in on a noted NYC Photo contest. There were nearly 6000 submissions and 5 judges who worked in the magazine and advertising industry.

Let's think about this. If the judges looked at each image for only 5 seconds it would mean that it would take them more than 8 hours to view the images without a break or discussion. Although they did not end up looking at all the images for 5 seconds it still took day. What I observed in watching those judges score those images was that scores got higher after a break where we gave them a snack! And the further from the break the lower the score. Now let me be clear. There were some photos that really sucked that showed up right after the break and they didn’t get a high score. But I did notice that there were some images that were quite reasonable that showed up before a break that should have been scored much higher but weren’t.  So the key is, the bigger the contest the more it’s going to be like playing the lottery. Consider that the Metro Newspaper worldwide photo contest, can you believe that it draws over 100,000 entries? Can you imagine the process it takes to review that many photos? I know that they invite notable photographers to judge the contest, and they’re paid an honorarium and are given more than four weeks to make a decision. But 100,000 images? That’s a lot. So just because you win or didn't win a contest, may mean very very little. Sometimes it’s just luck of the draw. By the way, the winner of that contest I sat in on? It was an image of a celebrity. It had been a long day and the judges were ready to go home, because they were giving up a Saturday and they weren’t being paid to be there. The debate didn’t last very long, as three of the judges? Well, they were kind of enamored with that particular celebrity, so the other judges didn’t put up a fight. I thought it was a solid photo but was it the best photo? That’s to be debated.  My point is simply this: do the research, do the best you can and roll the dice. But before you enter another photo contest, do listen to the previous podcast on what to look for in a photo contests and red flags.