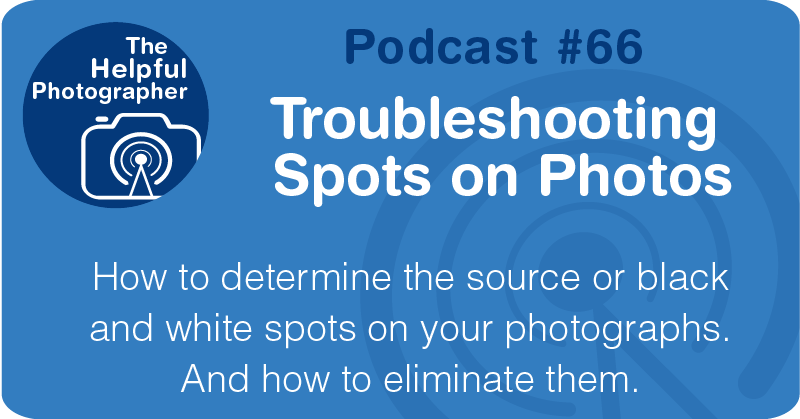 Today I want to talk about dust. Is it on your sensor or is it on your lens? When I’m on location shooting with participants in NYC, often times they’ll see dark spots on their images. Especially when the sky is just blue or white with clouds. And often they think it’s on their lens but more often than not it’s actually on their sensor. And then there are times when it’s neither of these. So how do you figure out where that dark spot came from and what can you do about it?

The first and easiest one to figure out is a dark or erroneous spot that is coming from your subject. Yes your subject. Over this past week I was out at the Oculus shooting with some participants. The Oculus is a building next to the World Trade Center and it’s an all white building. While photographing the building a participant noticed that there was a dark spot on her image. Like everyone else she assumed it was in her camera. She had taken several compositions of the same location; when I reviewed the images I noticed that the dark spot moved around the frame. But always on the same spot of the subject matter. For the most part dust on your sensor would sit in one spot for at least for a few frames or more. Knowing this, I looked at the building itself and there was a dark spot on this all white building. This is why it floated around the frame. And this is why it was in the same exact spot on the subject. So the first thing you need to do is to look at the subject itself.
If you are clear that it is not on the subject itself, then it is most likely on the sensor. Please take note that it’s very very rare that it is on the lens. To figure this out, take two photos of the blue sky with a narrow aperture like f/22. Once you do that, magnify the playback image and look at every part of the image. You will see exactly where all the dust is on your image. The reason that you shoot with a narrow aperture is because it will help bring out all of the dust. Once you find the dust spot, look at the second photo you took and see if it’s in the same spot. If it is then your problem is on the sensor and not part of the subject you are photographing.

Now if you have a DSLR and you see a spot through your viewfinder but it’s not in your image then it’s on the mirror in your body or in the prism. In either case, leave it alone, because it’s not going to affect your image in any way shape or form. And trying to clean that off will probably introduce more dust onto your sensor. Seriously leave it alone. What you need to consider is this. When you are shooting through the viewfinder of a DSLR, you are not actually seeing what the sensor is seeing so if you see it in the view finder there is no way that it is on the sensor. Furthermore, you are looking through a lens that is at its widest aperture opening. And when there is that much light scattering around it is difficult for the dust to show itself. This is why I suggested that you shoot that blue sky with a really narrow aperture opening. If you are shooting mirrorless you are actually seeing what the sensor sees. So in that case it’s on the sensor.

Another problem is fog. If your image looks foggy, and there isn’t any fog around, it’s likely that either the front or the rear element is dirty. However if your front and back elements are both clean, it could be one of these other two causes. One is a dirty sensor; in which case I advise that you get that sensor professionally cleaned. The other possible cause is light flare. Which means that you are pointing your camera towards the sun and it’s raking across the front of your lens. To solve that problem simply throw a shadow across the front of your lens like with your hand or a hood. Or point away from the sun a little bit. If you have to shoot towards or at the sun unfortunately you’re stuck.

This brings up the last issue, white spots. If you find that as you point the camera in different directions: away and towards the sun, there may be dots that move around the frame or disappear altogether. These white spots are usually from a combination of light flare AND a dirty lens. Cleaning your lens will eliminate most of this problem. But may not resolve all of your problems. Again you’re shooting towards the sun and that’s the issue.
Lastly, although most amateur photographers make a pretty big deal over dust on their lens, I have rarely seen problems presented by a few specks of dust on any one’s lens. Frankly I have seen mildew growing inside people’s lenses and it wasn’t a problem. As a matter of fact I saw a finger print on the INSIDE element of a lens which also did not present a problem. How did a finger print get on the inside of a lens is a long story and I really don’t have enough time to go over that story here but I’ll post it on the website.

Finger print inside a lens? The participant who had this lens with a fingerprint on the inside of his lens, had purchased an older lens which was very well known for it’s sharpness. Unfortunately it required a complete rebuild so sent it to someone who specialized in such matters. Although in every other way the lens was completely clean, there was a partial fingerprint left on an inside element of the lens. Although I could see it with my eyes, there did not see to be any problems with the image. There you go!