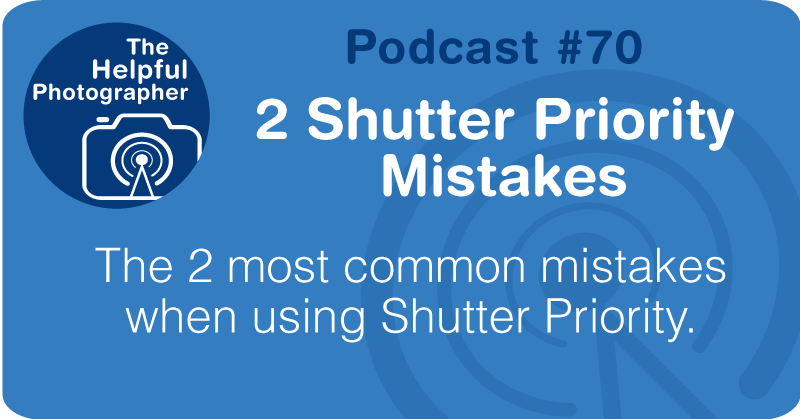 The best reason to use shutter priority is when motion is important to your image. Whether you are trying to create motion blur like with a panning shot or you are trying to stop action like with a bird in flight. In both cases I find that photographers are over doing it. They are either shooting too fast or too slow. The key is to shoot no faster and no slower than you need to achieve the results you want.

When you are shooting moving objects the tendency is to shoot faster than is needed. And most people are shooting upwards of 3 or more stops faster than is required. This is problematic because it means that you are losing light. This forces your camera to compensate by moving your ISO up, which will bring down your resolution. That is if you have your camera set to auto ISO. And if you don't have it set to auto, your image will likely be under exposed.

“But what about the aperture?” you ask. Yes of course your camera will open up your aperture but you're gonna run out of that in no time. Ok let's consider this. The sunny sixteen rule says that if you are shooting outside with no shade and no clouds in the middle of the day then you can shoot at ISO 100, F16, with a shutter speed of 1/125 of a second. Let's say you are shooting a bird perched on a fence in the middle of the day in open light. But that bird likes to flutter about and you want to stop the action of the wings. At a shutter speed of 1/1000 this would force your aperture to f/5.6. If you happen to be shooting a 2.8 lens you still have room. Good for you. But if you are shooting at sunrise or sunset or if there is cloud cover, you are going to lose those two stops in a real hurry. If the bird decides to head into the shade, you will likely lose another 4-5 stops. Which means at f2. 8 you would need to move your ISO to 1600. Are you starting to see the problem? If you decide to put your ss to 1/4000 instead of 1/1000 just for insurance guess what? THAT ISO IS NOW 6400. If you had set a maximum auto ISO with a maximum below this or if you decided on a static ISO because you didn’t want such noisy photos, then you risk grossly under exposing your shot. Do consider that I “guestimated” a 4 stop drop in light when that bird went into the shade, but in reality I know that it is likely to drop more than 4 stops.

So that’s the too fast problem. What about being too slow. There are a number of issues related to slow shutter speeds. Too slow of a shutter speed means that bird fluttering about won’t be sharp. And then of course there’s handshake but this is a problem which can be overcome with a tripod. Ok, but what if you want a slow shutter speed to show the movement or let’s say a panning shot with a moving background? I get a lot of people who want that classic shot inside Grand Central with all the commuters a little bit blurry so that it shows the hustle and bustle inside Grand Central. Many people automatically go to 5 or 10 second exposures. But then nothing really happens and the building actually looks emptier than it is. With such a long exposure, the moving people begin to disappear from the image rather than look like they are moving. And those who are standing still waiting for a train? Well they’re still standing still in the photo. The key with a shot like that, is that I find that the shutter speed is usually between a half second to a 1 second exposure, any more than that and the people begin to disappear.

Another problem with having exposures longer than necessary, is that you may encounter other problems out of your control. Like the ground moving. In a city environment things like subways and trucks coming by will shake the ground and again result in a blurry image. And for that panning shot of cars moving by, instead of getting a sharp subject with a blurry background both the subject and the background will be blurry if you shoot too slow. On the other hand both will be sharp if you shoot too fast.

So how do you know what to do? Unfortunately the answer is experience, you just have to practice and try different things. Start by just moving one stop at a time and see what happens. And keep shooting these things over and over again. Eventually you’ll know what to do in a variety of situations. In other words, keep on shooting.