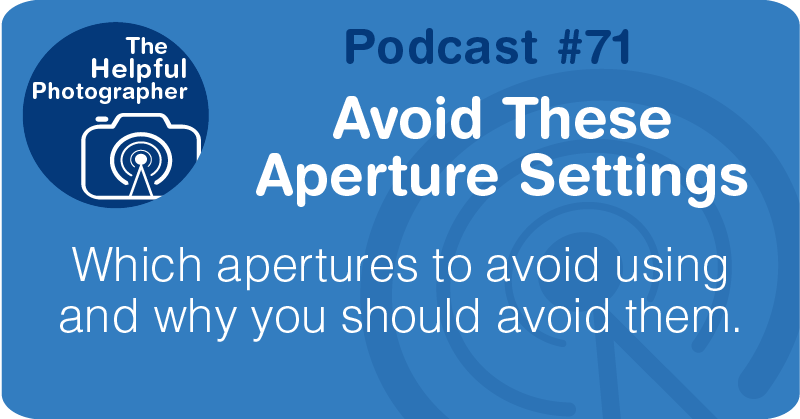 When beginning photographers head out of Auto, one of the main points of confusion is choosing the right F/stop. Two episodes ago I talked about the 2 most common problems when shooting Aperture priority. This episode will take a deeper dive into the more nuanced problems with various apertures.

Let's start with the high apertures. F/22 and f/32 and higher. Many photographers will push their apertures in this direction in an attempt to gain more depth of field or to get a better star burst from single point light sources like the sun or street lamps. The problem is that when you are pushing light through such a small opening you may find that although you gained depth of field and that star burst is more impressive, at a certain point, your overall image will become less sharp. The reason is because you are squeezing light through such a small hole. You have to consider that light behaves a lot like water in that it bends and bounces around. So when you are squeezing light through such a small hole you may it may degrades your overall image quality. Another issue with shooting at the higher f/stops is that you will find that every single speck of dust on your sensor is going to show up on your image. The reason is because the depth of field has been narrowed such that the shadows underneath that speck of dust has now been sharpened, revealing all that dust. So always ask yourself if you really need to close up your aperture that much or can you do with having it a bit wider?

On the other end of the spectrum we have similar problems; different problems but problems none the less. For those who like to shoot with those nifty fifties with f/1.8 or even f/1.4, what you find is that the depth of field is so shallow that it's difficult to put the focus exactly on what you wanted in focus. Before I go on, I want to remind everyone that if you talk to an optical engineer or a physicist, depth of field and focus are two completely separate things and they will tell you that you should not confuse the two. But in our world of photography, we perceive depth of field as focus because it looks and feels like focus. So as a photographer, for me they’re basically the same thing even though I know academically they are not. With higher apertures and a longer depth of field it feels like I am getting more focus. But when you're shooting something like an F/1.8 or F/1.4 you will find that the focused area is so shallow that it's difficult to get the right thing in focus. And as a reminder, when you're wide open you will also have issues with fall off and vignetting.

As you can see the far sides of your aperture can create a variety of issues. Which leaves us with the middle. Let's talk about the sweet spot. The sweet spot is the f/stop that will render the sharpest image your particular lens is capable of rendering. To be clear I'm talking about sharpness and not depth of field. Many will say that the sweet spot is the middle f/stop. This was also what I was taught. While others will say that it is f/8 on all lenses, btw f/8 is usually the middle f/stop of most lenses. But apparently, both theories are wrong. The sweet spot of a lens can be anywhere between 1 and 2 stops from the widest opening and in rare cases up to 3 stops. All of this depends on the lens and how it’s engineered. In order to figure which aperture renders the sharpest image for a particular lens you'll have to test for it or find someone online who has done the testing for you. You should also be aware that if you are shooting a zoom lens, the sweet spot will float depending on where you have your zoom ring. So as you zoom in and out you’ll have to keep up with that.

So should you only be shooting in the sweet spot of your lens? Well no, that's not what I'm saying. What I'm saying is that you need to be aware of the various consequences of your aperture choices beyond depth of field and not only do you need to choose wisely but you need to get familiar with your lens and know its strengths and weaknesses. For me, most of what I'm trying to get to is the sharpest image possible. So I tend to shoot in an auto mode because modern digital cameras tend to be programed to pull to that aperture, to render that super sharp image combined with the proper shutter speed. That is if you are shooting an OEM lens; cause let’s face it, no manufacturer is going to program in a third party lens into their camera. And by the way, you heard me right, I shoot in an auto mode. If I’m handholding and shooting a still object I shoot in Auto. And I'm completely unapologetic about it. The camera's programming can make the calculation automatically and that’s a lot faster than I can. So I let it do its job and I do my job, which is to take the picture.