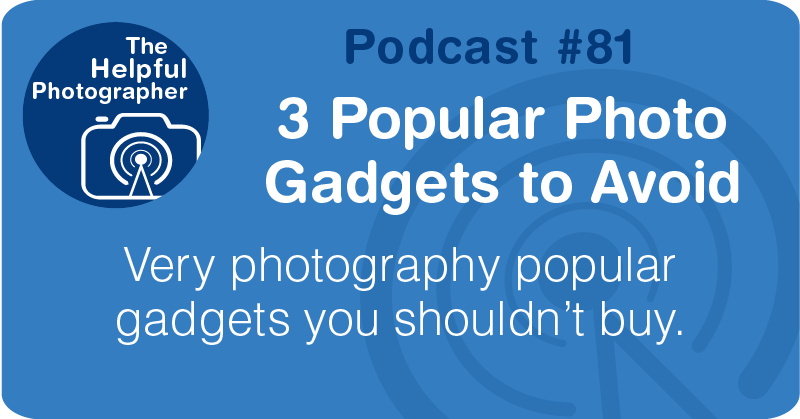 Over the past couple of weeks I talked about the tools I enjoy having in my camera bag. Today it's going to be the worst tools I’ve ever run into. I’ll be honest, I don’t actually own any of these products but I’ve dealt with many people who have brought them out on sessions with me. First on my list is the Platypod. I'm not a fan of this product at all. I know they a really devoted fan base but I’m just not one of them. I find that it's very heavy for what it does and I find that it's not versatile at all and you still need a head to mount to it. That being the case why not just get a table top tripod so you are at least a few inches off the surface the device is sitting on. Furthermore, if you don’t have a flat surface to work with you are kinda screwed. Even though ideally you want a flat surface to work with on a tripod, I can always make a tripod work even if the surface is uneven. As a result of this, the company is now offering little feet that you can add to your Platypod. But again what’s the point? Why not just get a small tripod.

Another horrible product are plastic Holga filters. When I was shooting film and teaching photography, I remember a student came to me very excited about a camera he had just bought. Why? Because it was $20 dollars and it shot medium format film. So what is this thing? It was called a Holga. Well it’s a plastic camera with a plastic lens that allowed you to shoot with medium format film. Medium format film was generally 2 inches wide, and most medium format cameras gave you a 2x2 negative. The advantage was that this was much bigger than 35mm film and gave you a ton more resolution. But since the Holga had a plastic lens, the image quality was total crap. And since it was $20 dollars the housing was crap too. So what made it crap besides this plastic lens? Because that $20 camera always had light leaks. Since film is light sensitive you had to make sure that the camera housing was completely light proof otherwise you would get streaks of light through your image. So, this student came to me bragging about how cool this was. Because the results were totally uncontrollable. This is where I start pounding my head against the wall. Because he thought it was cool because it was producing crappy images. In many ways it was doing what Instagram filters do today, but these days you know what your images will look like before you save the image. These cameras were really popular among young photo students in the same way the filters on Instagram are really popular now. So with the advent of digital Holga has introduced the filter wheel. It's a device that will fit on your very expensive camera with the uber high resolution sensor to basically give you a really crappy image with weird color combinations. My question is why not just do this in Photoshop or Light room? It makes absolutely no sense to me. Why would you spend extra money and carry extra weight in your bag to do this? Ok, enough of that.

My third pick for worst camera tools is the lens cleaning pen. I'm willing to bet that most of you listening to this have one in your bag or have debated buying one. Why is this such a bad product? Well the brush really should not be used for your sensor as it's not anti static and will likely introduce more dust into your camera than it removes. And if you were planning on using it for your lens, well, it's not going to remove any finger prints. It will remove dust but why not just blow on it? So the brush is all but useless. But then there's the other side of the pen which is a lot more problematic. It's got a flat disc with a microfiber cloth stuck to it that is meant for more serious cleaning. But here's the problem, once that microfiber is dirty you can't get that clean again. And it's so small that it's really only good for maybe two cleanings before it's dirty. And heaven forbid you use this on your sensor! Aside from the dirty issue you can't get it into the corners of your sensor anyway. If you need something to clean your lens carry a micro fiber cloth that you can throw in your washer. And for your sensor buy a dedicated cleaning brush. They’ll allow you to get into the corners and they’re usually single use only for a reason. Although I have had these pens, because they have come with something else I've purchased, I've never allowed one to make it into my camera bag.

So those are my three worse photo gadgets.