Photo Tips Podcast: The Difference Between Depth of Field and Focus. #20 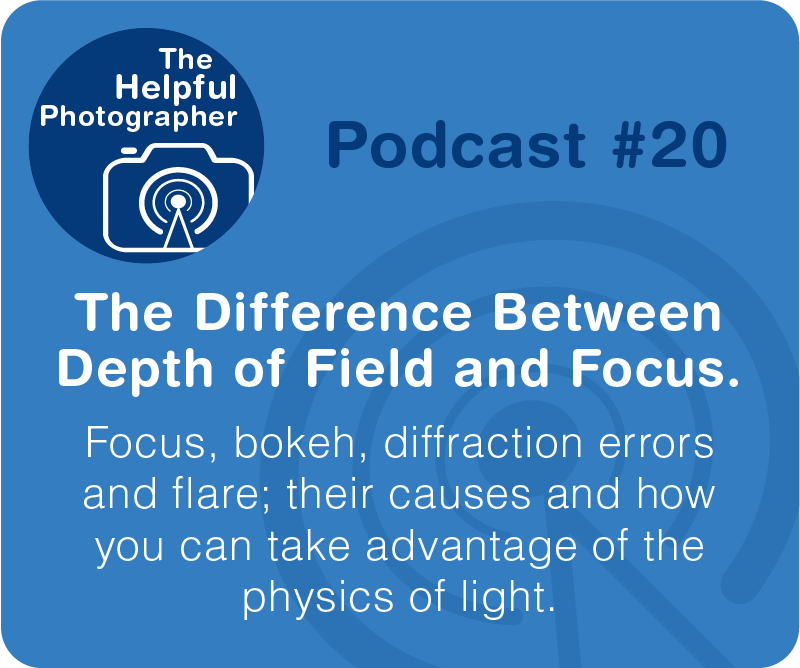 
Transcript
The Difference Between Depth of Field and Focus


Zim: We all know the depth of field is controlled by aperture, but the question is, What is actually happening that causes of the field and why does changing your aperture change depth of field?" For answers to these questions I'm once again calling Professor Rebecca Theilmann at the University of California San Diego.

Zim: Hey Doc, how are you doing?

RT: Doing good, how are you?

Zim: Hey welcome back to the podcast, thanks for joining me again.

RT: Thanks for having me it's great.

Zim: I really appreciate you answering more questions it's been really enlightening. So I heard that you hiked the Grand Canyon since last time we spoke.

RT: I did. I've lived in Arizona most of my life, and it's the first time I've completed that hike and it was a fantastic vacation.

Zim: Really? How long did that take?

RT: We started from the south rim, and it's ten miles down and we did that in about a little over five hours; and when we crawled back out it took us six.

Zim: Did you take any pictures?

RT: I did but to your disappointment as a photographer I took a cheap ass point and shoot camera. Because it didn't weigh a lot and I was concerned about backpack weight. Next time I'll either take a better point shoot or I'll try to take my better camera. could.

Zim: You don't need that much water man! Bring a camera! No worries!

RT: But next trip, maybe during the winter I'll do that.

Zim: But dry though.

RT: But water was more important than camera gear.

RT: Okay, well focus relies to the fact that you're putting the image which is your sensor or film in focus which is a two dimensional plane. Depth of field implies a three plane information, so focus is basically your sensor or film as a 2D plane and whatever you're choosing to have focused that will be in focus on that 2D plane. So a good way of thinking about this is thinking of when you go to the movies, that's the reverse of the camera system that you have; think of the old film movies you have a thin film, it's rotating past the light, and you're projecting that onto a two dimensional plane that's in front of you. That's what you're watching. So it's basically focus is related to a 2D plane and depth of field is related to the perception of the image that you're looking at.

Zim: Okay so in other words a camera is never capable of focusing on multiple planes at once, is that correct?

RT: No, it's incapable of doing that.

RT: If your aperture is all opened up, that means you're using as much of the lens as possible to collect light to your image, right? Well lenses aren't perfect; the deal is, the more of the lens you use the more light scatter that you have which are from just general imperfections in the lens. You're just going to make your image fuzzier. The more lens you use, the more fuzzy your image is going to be. Now if you make this aperture smaller you're using less of the lens. There's less light scattered and the image is going to have the perception of being sharper. Which gives you the idea that maybe you have a larger depth of field.

Zim: But my understanding and my actual experience is, there's a certain point at which you can't close down too much otherwise the image actually gets blurry. You get more depth of field but the image quality actually goes down too, it's not as sharp.

RT: Well that's probably what's happening is when the aperture gets really small you get what's called diffraction limited or diffraction errors in the image. So this is where it gets to a little bit of physics associated with it. So as I mentioned in the last chat we had, light has natures: it's an array or a wave. It has both of those at the same time and what happens with that is the light tends to bend around apertures and if you have like a single light source and you put it through a pin hole, what ends up happening is you don't see a spot on the other side you actually see rings around the center dot. And that's what's called diffraction. So if you drop a stone into still water and you see the rings that emanate from that, that's the diffraction pattern. So what happens is when you stop down that aspect gets more dominant in the image. Those rings instead being tighter and tighter they get wider and wider. So if you're stopping down at the level you're saying is, and the diffraction is creating these errors in the image. So there is probably a balance between what aperture you need to get to the sweet spot of the lens to where to diffraction doesn't enter in causing more problems, so it's a balancing act.

Zim: Can they engineered glass or apertures to overcome that problem?

RT: Well no the the diffraction limited is just the physics of the aperture so the wider the aperture the smaller the distance of the rings how close they are they're really tight you need to go down to a smaller aperture they get wider. It's just based off of the wave nature of light it just is.

RT: You can't you can overcome physics.

Zim: Okay I've got just a couple more questions do you mind if I ask?

Zim: So one of the things that photographers have been talking about quite a bit is something called Bokeh and Bokeh refers to the look of a shallow depth of field and different lenses produce different looking shallow depth of field. Is caused by the aperture? I know there's some apertures look more like a stop sign and other apertures look more like a circle.

RT: Well if the apertures are all opened up and if you've got the leaves of how apertures are? It will likely look more circular when it's all open data so what that's telling me is the Bokeh is likely due to the imperfections of the lens design. And it's probably very particular or that particular lens. Lens designers really try to make it as perfect as possible but there's always imperfections so you're basically looking at the the imperfections of the lens that are creating these patterns that you're seeing.

Zim: That actually brings up another question with regards to the design of the aperture. I know I'm out of the realm of depth of field a little bit here but the design of the actual aperture like I said some are more like a stop sign, the others are more circular. Does that affect the image quality at all?

RT: If you get down to diffraction level where you're stopping down to where it would look more like a stop sign versus a circle then, what that ends up doing is that pattern I said that would be concentric rings, that would be making your image little bit blurry as you're going down and doing that, instead of looking like rings they'll look like star patterns. So the less leaves you have the less star patterns you have smearing. Where as if you have more leaves you would see that pop out a bit more. I don't know how strong of a behavior that would be with digital imaging nowadays you would really have to focus in on a certain part of the image to pull that out if you're looking for it you'll find it. But that would be the one point I would see it but if there's like three leaves or four leaves, yes the effect would be quite dramatic. But I have a hard time believing that lens designers in the mechanics of people would do it to where that would affect image quality quite severely. I'm hoping that's the case.

Zim: We're we're kind of running short on time here, but and that led me to one more question. I'm so sorry just one more question. You may or may not be able to answer this, last week we were talking about flare or glare now I'm going to talk about flare. So when we point our camera towards the sun sometimes forget like concentric circles coming into the camera. Now this has been extremely desirable to obtain a certain look. Would I be able to force that more with the wide open aperture or a smaller aperture?

RT: I don't think it has anything to do with the aperture. At that point the glare that enters the system, it's basically stray light that's entering and reflecting off the services in the lens. I believe if your aperture is smaller the effect would be less because you're not allowing that reflected light that's not following your typical pattern entering the sensor. Because that's the point of the aperture in general. I think if you want to enhance that you would want to open up the aperture as much as possible.

Zim: Okay I'm gonna have to try that, that was helpful.

RT: Yes I have to think through that but yeah I think if you wanted to do that, yeah open up your aperture.

Zim: Thank you so much! Is there anything else we need to know about depth of field or aperture?

RT: Focus in on your 2d plane. If you want things crisper stop down but not to the level where diffraction might be blurring out some of the effects you want to see.

Zim: Thank you so much for joining me again. I'm probably going to call you again in a couple weeks I hope you don't mind.