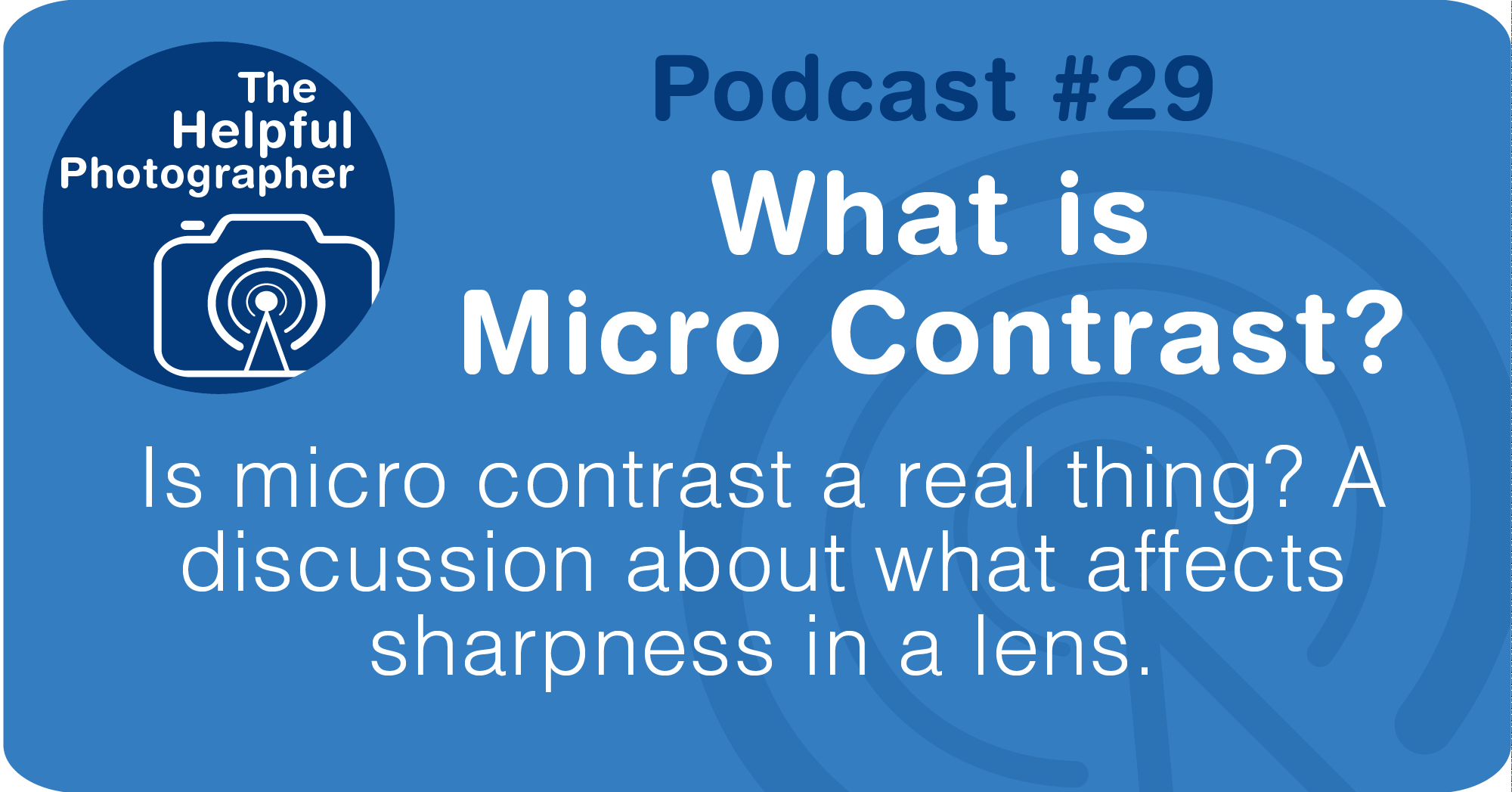 
Transcript
What is Micro Contrast?


There's been a lot of talk about micro contrast in the “photoverse”. I think to understand micro contest you need to understand chromatic aberrations and how light moves through glass and how it moves through an aperture. For answers to these questions I called the Dr. Rebecca Theilmann of the University of California San Diego.

Z: Hi doctor how you doing?

RT: I'm doing good. How are you today?

Z: Great, it’s really good to see you again. Today I've called you to talk about something called micro contrast. It's been a big discussion within the photographic community. And I wanted to get your opinion. What is micro contrast exactly?

RT: Okay, micro contrast is the ability to get super sharp images in the planes so there's not any blurring that's involved in the images.

Z: So the question is, how are they achieving this?

RT: This is done by minimizing the errors in the lens system as much as possible. Now a lens system will put in three types of errors as light travels through it. One is called chromatic aberration; another one is done by the shapes of the lenses themselves; and then there's also blurring from the aperture. So I'll go back and talk about chromatic aberration. Have you ever used to prism before? Where you see white light going on one side and rainbows coming out the other?

Z: Yeah we did this in third grade right?

RT: Yep. Okay so that's what chromatic aberration is. Anytime light travels through glass it will spread it out into its different colors, and it will continue through the lens system. Now it's the lens designer’s job to minimize that spread once it reaches the image on the sensor and the chromatic aberration has a very predictable pattern with the lens shape, so they're able to balance this all out. So at the end you will have some residual chromatic aberration but it's usually not apparent to the eye once you look at the images.

RT: Most likely you'll see it on any boundaries where you have a black and white border. You'll see it on the white the black side where you'll see color variations through that boundary. You can't eliminate chromatic aberration but you can minimize the effect. So another one is residual aberrations in the lens system where you have the concave and convex surfaces, those will produce aberrations that are known as spherical aberration, coma, and things like that. And the lens designers know what these are; and it's their job in the lens system to minimize these effects as well to minimize the blurring; and it's not related to the color of the light it's related to the shapes of the lenses blurring it when you get to the end. So at that point in time the lens designer should have that tightness in hand. And then the third one is the blurring of the aperture which is the shape. Whether it’s a stop sign or circular when light passes past the boundary that’s circular, it will produce this wavy pattern on the image plane. Usually you can rarely see the effects of this. These are teeny teeny tiny errors but those are the things that are involved with the ultimate blurring of the image on the other side. From my perspective micro contrast is when you have a lens system in a lens base and a camera base that is super super tight that minimizes all three of these effects on top of each other. But I can only see certain number scenarios where this will work. So this means you're removing blurring from outside sources. Which is you’re removing human motion which means you have the camera on a tripod.

RT: You're not touching it. The other one is you have static lighting. There's nothing that's moving on the image itself through the course of the image; you also have a static object. And then if you have all these things in place and you blow up to that level to where you see no blurring. There is where you see your micro contrast. Now one thing is, do you see anything why this would be sought out by photographers on artistic side? Why would this be something that would be a perk within a lens system?

Z: Well you know, I mean within the photographic community there's always this discussion of sharpness. Everybody wants everything to be totally sharp, and I think it goes along with this micro contrast thing; but also people are talking about micro contrast in terms of something they call a 3D pop. Things look a little bit more three dimensional when they're really sharp. So I guess what I'm getting to here is it's starting to sound like this term micro contrast is a made up term and you're just talking about elimination of problems within the lens like chromatic aberrations or just making things sharper right?

RT: Correct, but what would be interesting is I don't know why one manufacturer over the other, would not build a tight lens system. They wouldn't be able to sell them if they weren't tight in general and in most cases of photography if you're holding the camera, even with the software in mine that removes motion, you are going to have residual blurring. So I'm not quite sure if this is something that a publicist decide to pick out to describe it. Or if there is something with regards to how the photographer for themselves sets up the environment so they can get that image to pop with whatever they're using to take the photograph.

Z: Right I think this is mostly (this term micro contrast is) a new marketing ploy as opposed to saying we have a really sharp lens. They're saying we have a lens that has micro contrast. I think the goal has always been to create a sharper and sharper lens that reduces all of the problems with focus, fuzziness, the three things that you just talked about: chromatic aberrations… now I can't remember the other two. But from a visual perspective things are generally nicer when they're good and sharp, but as you said it sounds like in order to really really see this you've got to be on a tripod; you have to be shooting on a remote shutter; you also have to be shooting things that are static and then you have to blow it up to an extreme in order to notice that you've eliminated some of these issues. Well that is unless you're shooting a low end lens, in which case you don't have to blow up that far to see the problems. But fundamentally, I'm shooting professional lenses and I generally don't see any issues there.

RT: Yeah, I believe that's the case because if they're selling it as… this was something I was thinking while we were having this discussion is… most of the lenses I've seen that I use myself are multi focal. You change it for the range that you have and the aberrations changes as you change to a new focal distance, as you decide to change the frame and things like that.

RT: To have a lens system be tight all the time it would have to be a single focus. Because then nothing is really moving, so you'd have to physically move yourself to the place of the object that you have… put it on a tripod and do all these other kind of things to get it to happen.

Z: Okay well that makes a lot of sense, because yes, the sharpest lenses on the market are always fixed focal length lenses which we call prime lenses these days.

Z: So yes zoom lenses notoriously are less sharp than fixed focal length lenses but on the other hand again if you're shooting a high end zoom lens you're not likely to see those problems unless you're really blowing up your image and more or less looking at that image through a microscope.

RT: Yup, so that's micro contrast on the technical side. It sounds like the interpretation from photographer’s perspective would be: okay it's a lens.

Z: All right so bottom line, micro contrast as a term is a marketing tool. We're just talking about really sharp lenses then.

Z: So I feel like I've bothered you with a pretty lame question today so we'll call it a day.

Z: All right. Thank you so much for joining me and maybe we'll talk in a few weeks when I come up with some more technical questions.

RT: Sounds great thanks for including me.