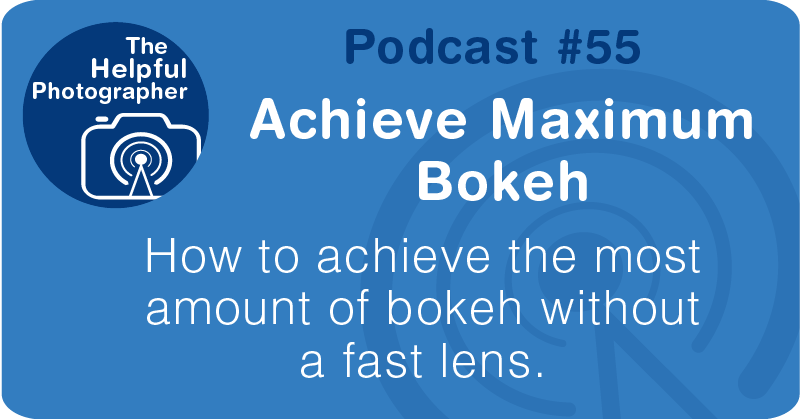 Bokeh. What the heck is Bokeh? Well As I understand it, it’s a Japanese word which is meant to describe shallow depth of field. Shallow depth of field is how much is in focus from the front side of the frame to the back side of the frame. In other words it’s the out of focus stuff that’s caused by aperture and light rather than by motion blur or resolution issues. In the past English speakers have always used the words “depth of field” to describe this, so why not just keep using those words for English speakers rather than adopting a Japanese one? Personally I don’t like using the word Bokeh in place of depth of field, but that’s just me. Having said this, Bokeh is also often used to describe the quality of this blur. And to that end I think having a separate word to do that, makes sense.

Now that I got that off my chest. What are the different ways we can achieve shallow depth of field beyond changing our aperture. Because at the end of the day, moving our aperture just one or two stops does not change it nearly as much as people think it does. And if you don’t believe me, just do a test. And for those who think that buying a really fast lens will do the trick, something like an f/1.2, the problem is that the depth of field is so shallow that you will have difficulty nailing the focus where you want it. So although shooting a really fast lens has certainly its advantages but it can create other problems too.

Lastly, to make the background feel even more of focus, use a longer lens. The more focal length you have the more the background will feel like it’s out of focus. It should also be noted that different lenses can make the blur (or the bokeh) look different simply due to the way the glass elements in the lens are designed. So the strategies I just shared will change the amount of blur you get, not the quality of that blur.