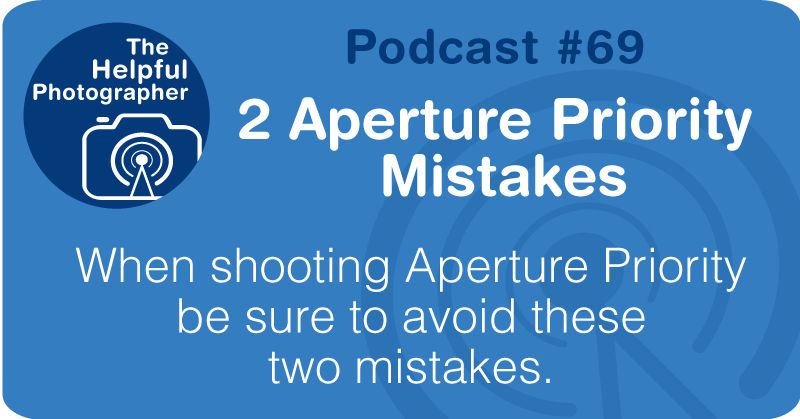 In my experience there seems to be 3 key reasons why people shoot in Aperture Priority. One is somehow they think it will make their pictures better than shooting Auto; the second is because shooting in Manual Mode is just too hard for them and third is they want to control their depth of field which they think will make their photos better. I will argue that changing your depth of field will make your photos different but not necessarily better.

Ok, so you want to make your photos different, that's OK and shooting in aperture priority can help, but there are some things you need to keep in mind. Depending on how you have your camera set up, when you use aperture priority you are fundamentally telling your camera to please set your shutter speed and your ISO. But here's the problem. If you have set your camera to a static ISO then your camera has no option but to move your shutter speed to compensate for changing light conditions. As photographers we’re almost always working with less light than we want. So when you move your apertures up to like f/16 or f/22 you’re losing light. As a result the camera has to do one of two things, slow down the shutter speed or raise the ISO. If you had set a static ISO, as I just said, the camera has to slow down the shutter speed. “So what?” you ask. Well, if you are shooting outside in the middle of the day and there’s plenty of light, this isn’t much of a problem. But let’s say you enter a building like the New York Public Library, which is more or less akin to a cave. The lack of light and your high aperture means that your camera is going to have to really slow down to gather enough light for a good exposure, likely to the point at which you can no longer hand hold your camera without a blurry image. But you might ask, “What if I set a minimum shutter speed? Then I’m guaranteed a sharp shot.” That’s a nice idea but here’s the problem. If you did that and also set a low static ISO, then your image will most certainly be under exposed because it is no longer allowed to gather more light via shutter speed. If you set an auto ISO then it’s going to go through the roof and your resolution is going to be crap. But then the question is “What if I also set a ceiling on my Auto ISO?” Then we’re back to the problem of under exposure, because then the camera isn’t allowed to use ISO to gather light either. Let’s review, you have low light, and you set a high aperture, which reduces the light you are gathering through your lens, then you set a limit on your shutter speed so your camera can’t get more light there, and then you set a limit on your ISO which again limits your camera’s ability to get more light. All of which will result in a moderately to a grossly under exposed image when you are under low light.

So what about moving the ISO manually to compensate for the problem? Yes, of course you have to do that but let’s do the math. You’re outside in broad daylight shooting f/16 at 1/125 of a second and ISO 100 with a 50mm lens; all is good, but then when you entered that library you lose 7 stops of light – which is absolutely conceivable, and actually a bit wishful because it’s likely to drop more than that. With a 50mm you can drop your shutter speed to 1/60 comfortably – at least most people can. But now to make up the other 4 stops you have to move your ISO which would leave you at 6400 ISO. For most cameras it’s still a huge drop in image quality. Some of you will say that you can live with 6400 ISO. That’s fine, and there’s nothing wrong with that. But, I find that most people shooting in Aperture priority set their minimum ISO to 400 which means that their shutter speed now drops to 1/8 of a second. Which is well below anyone’s hand hold capability even with image stabilization. And of course if you are shooting with a tripod, slow shutter speeds don’t matter but most people aren’t. So this is a long way to say that the most common mistake is choosing too high of an aperture trying to get more depth of field without consideration for shutter speed or ISO. There are other problems with shooting with a high aperture which I won’t go into here, but just know that they’re there.

Another common problem is shooting too low of an aperture. Many photographers will head towards that 1.8 or 1.2 hoping for that beautiful shallow depth of field, especially when shooting portraits. But very often shooting wide open at such low apertures mean that your range of focus is so narrow that you have hit your focus exactly and any slight shift of the camera forward or back means that what you intended to have in focus isn’t. Also, shooting wide open with a very wide lens often introduces vignetting or fall-off. Vignetting is when the corners of your image go dark and fall-off is when those corners lose focus. By shooting just 1 or 2 stops in from your max will help to resolve this problem. To be clear not all lenses do this but you do have to pay attention to those that do. And in order to figure this out you have to run a test.