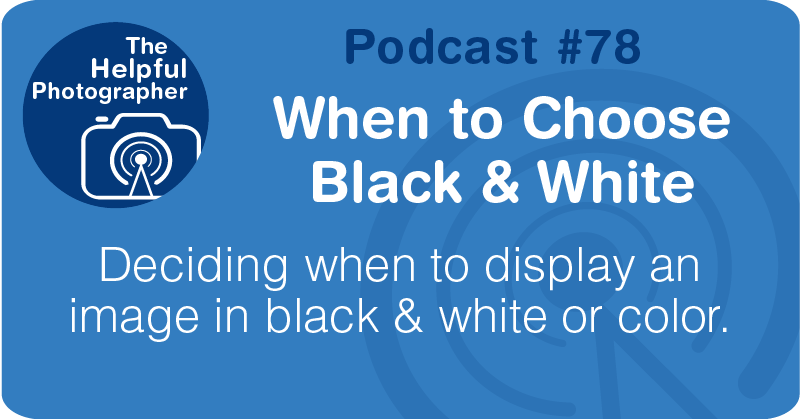 
Transcript
When to Choose Black & White #78

I recently gave a talk to a camera club and during the question and answer segment I was asked how I decide between shooting color and shooting b/w, because I had presented both during my talk. When we were still shooting film I would carry 2 cameras, one with b/w film and the other with color film and I had to make a decision on the spot.  Now with digital I don’t have to make that decision until later. Although the decision making process is similar, when it happens, has changed.

The example that came to mind during the talk was when I had to photograph a small local factory that employed physically and mentally challenged people. I was hired to photograph these folks happily at work making picture frames for the company’s brochure. The factory was an old 1950’s building and the interior was full of drab 1950’s puke green. The decision was easy. Black and white. Why? The only color to be had. I could not make this place look like a pleasing environment in color. With black and white, the viewer would only see the people in my photos and what they were doing rather than thinking, “O my God what a hideous place to work.” So that was easy.

But let’s bring it to present day. How do I decide now what should be b/w and what should be color? First, there are definitely some images that would work as both. But sometimes they only work as color or as black and white. When I look at a color image I’m looking at whether or not the color adds anything to the shot. Does it help to bring context or vibrance into the image or does it take away from the image?

One of the things I’ve been asked to shoot lately have been baby photos. Yes, I know baby photos. Often there are people who join the shoot who didn’t get the memo on what to wear, like grandparents. It’s always the grandparents. So now the colors are clashing and things just look horrible. By going to b/w this is no longer a problem. And with digital, I can often create more emphasis where I want it by controlling the density of certain colors. For example, with Lightroom, I can make certain colors significantly brighter or darker, without any consequences when working in black and white. So by going to b/w I’m controlling the clash of colors.

Another example is this, I recently photographed a surprise engagement for a couple in Times Square. It could be argued that Times Square is an unholy mess when it comes to colors and textures. And this would be correct. But I chose to keep their images in color for exactly this reason. I could not get them separated from the background easily. But leaving all of the colors of Times Square in the photo made the image much more interesting.

In other words, if your colors are not particularly interesting or does not add anything to your image you should consider making your image black and white. Otherwise go with color.